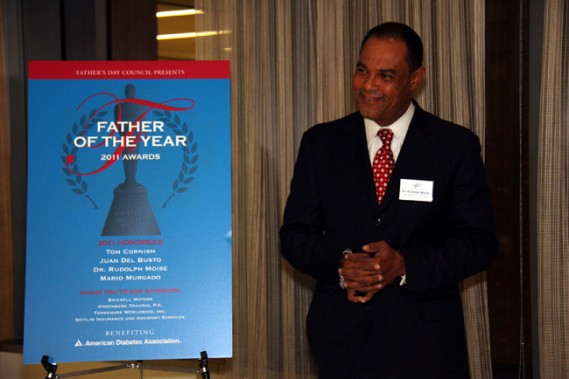 The Miami Father of the Year Awards Dinner will be held on June 17th, 2011 at the Ritz Carlton – South Beach. All proceeds from the event will benefit the American Diabetes Association’s programs of research, information and advocacy.

For more than 20 years, the National Father’s Day Council has raised more than $21 million for its charity partners through the Father of the Year Awards dinners across the country.  Since 2000, more than $9 million has been raised for the American Diabetes Association nationally.

The “Father of the Year” award is an opportunity to celebrate and honor those fathers whose lives revolve around family, citizenship, charity and responsibility.

Through the Father of the Year Awards program, the Father’s Day Council (committee established by the ADA) in various cities identifies and honors 4-6 fathers who have demonstrated the ability to balance their personal lives while achieving a high level of success in their careers and serving as outstanding role models in our community.

Receiving this award not only symbolizes the relationship the father has to his family and community, but also acknowledges the achievement and accomplishments he has earned professionally and personally throughout his life.

The first Father of the Year honored by the National Father’s Day Council was General Douglas MacArthur, who was honored in 1942.  Many dignitaries have received this honor since that time, including several presidents.

For more information on diabetes and the American Association visit www.diabetes.org