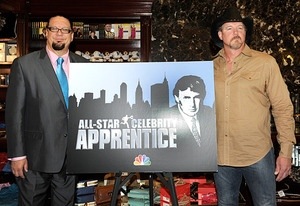 May 19, 2013 is the season finale of Donald Trump’s All-Star Celebrity Apprentice and viewers are on the edge of their seats as always… will it be Penn or Trace? And how does America’s toughest boss keep it fresh season after season? Penn Jillette, Trace Adkins, and the Donald Trump talked with Kamilah Wallace of Premier Guide Media and kept us in the loop.

While Trump is the driving force behind the addictive show, he is the first to acknowledge the role that his celebrities have in the success of the show. According to Trump, “I think to a large extent it’s the people. Having people like Penn and Trace and so many others; Little John – everybody loved his performance and the job he did and so many others. I think it has to do with that. You don’t like to change the formula too much because it works. It just seems to work. You don’t want to change too much. But largely it’s the people. It’s the demeanor. It’s some of the players become and you’re speaking to two of them right now because Penn and Trace really became great players. I think by watching and having previously performed. So we do get quite a bit of change into each season actually.

Ironically, what makes this season special is that the celebrities already know the game, and they are have used what they know to their advantage to shake things up and amplify the level of competition. When asked about their experience between their first time doing Celebrity Apprentice and the All-Star season, Jillette and Adkins agreed that they preferred the second time around. Jillette commented, “For me it’s no comparison. The first time [I did the show] I was a little skeptical and uncomfortable and guarded. And then as I grew to trust the show and trust Mr. Trump and I’m afraid to say Trump myself. The second year every show I enjoyed more than the show before and I just had a blast.” Adkins added, “My first season was much more stressful. This season I came in much more confident. I thought I had a good handle on what [this game was] – how this game was played and I thought I knew how to win it. So I just felt much better this season.”

Even though the contestants were more confident this season, the competition was fiercer than before. Jillete’s comments on Adkins are indicative of this fact. “I think Trace is the best who’s ever played the game. I think Trace is unbelievable, just wonderful, smart, creative, honest, and I loved all of that and I think I did a slightly better job.” Clearly, Trump is going to have a hard time picking one contestant as the winner, and as we know, in the world of Apprentice there can only be one winner…right? Maybe this season we are in for a surprise ending. When asked about the finale Trump stated, “It’s very tough. I mean they’re two tough players. We have a tremendous cast of celebrities that each of them have brought and I won’t give you the names but you’ll see them very soon and maybe will give them out; I’m not sure if I’m supposed to. But it’s a very tough group of people and the game is played very hard. It’s a little bit nasty in a couple of cases. But overall I think it’s really going to be great television. And it’s live; the whole thing is live for two hours…. I have the hard job. I have to fire one fire one of them but believe me they both are talented people…Maybe there is another way. Hey, that’s an interesting idea; anyway that would be a little interesting wouldn’t it?

When asked how and when Trump has historically decided who the winner of Apprentice was, whether it was premeditated or a last minute decision, Trump’s comment does nothing but keep us guessing. “Sometimes I know and sometimes I don’t. I will tell you honestly in this case I do – I don’t. A lot of times I will have a pretty good idea as to who it’s going to be.” So will it be Jillette or Adkins? Only Trump knows…or does he…?