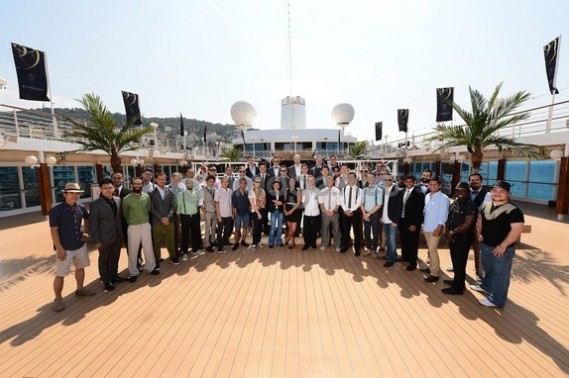 44 of the world’s best bartenders – together with fine-drinking industry elite, international celebrities, and global tastemakers – convene aboard the boutique Azamara Journey cruise liner, for the fifth annual WORLD CLASS Global Final, the largest and most credible mixology competition.

James Thompson, Managing Director Diageo Reserve, said, “We are thrilled to welcome a record number of bartenders to this year’s Global Final WORLD CLASS. WORLD CLASS bartenders are synonymous with sophistication, impeccable service and pushing the boundaries of contemporary and experiential cocktail culture. The programme [WORLD CLASS] elevates the craft of the bartender, discovers new talent and previews the latest trends which consumers will soon be able to sample when visiting WORLD CLASS accredited bars across the globe.”

Setting sail along the French Riviera in Nice and Monte Carlo, the voyage will include stopovers in some of the Mediterranean’s most iconic and chic destinations including St. Tropez and Ibiza, before culminating in the Catalan capital of Barcelona where the WORLD CLASS Bartender of the Year 2013 will be crowned. This is the first time that the WORLD CLASS Global Final is held on a luxury cruise liner, underscoring the concerted effort that the industry is making to elevate the culinary experience in cruises.

During the WORLD CLASS Global Final, which has become a landmark week on the fine-drinking circuit, over 600 attendees will celebrate the craft of bartending with:

Recognising the craft of the bartender, through its five-year history, WORLD CLASS has become a landmark week in the mixology circuit. What began as a bartending training programme is now an internationally recognized annual event transforming fine drinking experiences and cocktail culture around the world. Launched in 2009, WORLD CLASS is an international platform to showcase talent from the best bartenders all over the world while creating an outlet for luxury fine drinking experiences to unfold.

In 2012 the WORLD CLASS TV Show was launched, a TV special putting a spotlight on the WORLD CLASS bartenders and elevating a new generation of mixologists to celebrity status. This year, the 4-episode series will be broadcast by 20 major TV networks in more than 100 countries with an opportunity to reach 25 million consumers. The WORLD CLASS social forum on Facebook is a highly engaged community of over 16,000 elite bartenders who meet to exchange ideas and debate on the latest trends in mixology.
Follow the competition on Facebook at the ‘Global WORLD CLASS Finals’ page: www.facebook.com/GlobalWorldClassFinals