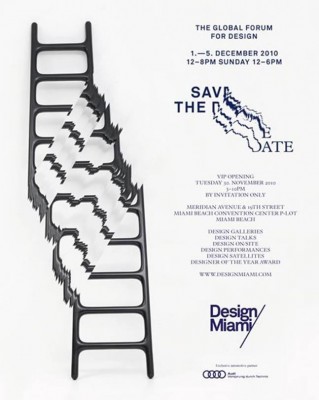 Design Miami/ To Relocate To Miami Beach This December

Design Miami/, the global forum for design, will present its sixth edition this December in a new location in Miami Beach. For the first time in the show’s history, the fair will be staged on Meridian Avenue and 19th Street, adjacent to Art Basel Miami Beach at the Miami Beach Convention Center. This year’s show will offer a more streamlined, seamless experience for the collectors, exhibitors, sponsors and general public that attend both fairs. Design Miami/ has commissioned Moorhead and Moorhead, an emerging, award-winning design studio, to create the show’s temporary structure for its new Miami Beach location. Details on this structure will be announced in the coming weeks.

“Presenting the show in Miami Beach will offer us a new context,” says Wava Carpenter, Acting Director of Design Miami/. “For the past five years, the Miami Design District provided us with a wonderfully creative and nurturing environment in which to grow our brand and the neighborhood will always be an integral part of the Design Miami/ identity. At the same time, we are tremendously excited by the opportunities a move to Miami Beach affords us in terms of evolving our show and making it more accessible to a wider audience.”

Craig Robins, Co-founder and Principal of Design Miami/ states: “The move to Miami Beach will create value for our collectors, exhibitors, sponsors, partners and those who come to take part in our events. The growth of both the Miami Design District and Design Miami/ in recent years has been extraordinary. This move to the Beach will allow the programming in the District to evolve and flourish, while creating an entirely new set of opportunities for Design Miami/.”

In his other role as Chief Executive Officer and President of Dacra, Robins is widely credited with having transformed both South Beach and the Miami Design District into world-renowned centers for cutting-edge art, design, food and fashion, making the fair’s move to Miami Beach especially significant for him.

In 2009, Design Miami/ Basel relocated to Hall 5, in the Messe complex that houses Art Basel in Basel, Switzerland. The response to the proximity from collectors, dealers, and sponsors was overwhelmingly positive, with the 2009 and 2010 Basel shows setting records for Design Miami/ in terms of sales and attendance. A similar response is expected for the move of the upcoming Miami show.

The sixth edition of Design Miami/, opening November 30, 2010, promises to be the most dynamic yet. An eclectic, international mix of participating galleries and bold cultural programming will be announced shortly. For further information, visit www.designmiami.com and www.designmiamiblog.com.