Design Miami/, the global forum for design, is proud to announce that German designer Konstantin Grcic has been selected as this year’s recipient of the Designer of the Year Award. New work commissioned for the fair, along with an exhibition of highlights from Grcic’s career, curated by Grcic himself, will be presented at the December 2010 edition of Design Miami/.

Each December, the Design Miami/ Designer of the Year Award recognizes an internationally renowned designer or studio whose body of work demonstrates unmatched quality, innovation, and influence, while expanding the boundaries of design. The Designer of the Year must demonstrate a consistent history of outstanding work, along with a significant new project, career milestone, or other noteworthy achievement within the previous twelve months. Past Designer of the Year winners include Zaha Hadid, Marc Newson, Tokujin Yoshioka, the Campana Brothers, and Maarten Baas.

“As we started looking at potential nominees for this year’s award, Grcic’s name quickly rose to the top,” says Wava Carpenter, Acting Director of Design Miami/. “Once nominated, our jury unanimously voted for Grcic—a clear testament to the strength of his work both throughout his career and over the last twelve months. Konstantin’s work in the last year has demonstrated his incredible range and prolific talent. His ability to work in multiple contexts simultaneously is the hallmark of today’s most successful and enduring designers, who of necessity are highly sensitive and responsive to the fluctuating demands of the market and the rapidly evolving discourse surrounding design.”

The Munich-based Grcic is not only one of the world’s most influential designers, but his disciplined, architectural, and boundary expanding approach to industrial design continues to set his work apart from his contemporaries. Founded in 1991, Konstantin Grcic Industrial Design (KGID) has worked in fields ranging from furniture and product design to exhibition design and architecture-related commissions. Grcic’s products have received awards including the Compasso d’Oro (for the MAYDAY lamp in 2001) and are part of the permanent collections of world-renowned institutions including The Museum of Modern Art in New York City and the Centre Georges Pompidou in Paris. Throughout his career, Grcic has designed for companies including Cappellini, Established & Sons, Flos, Iittala, Krups, Magis, Moroso, Muji, and Vitra, among others. 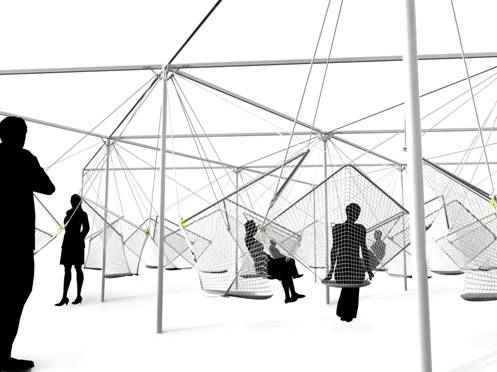 Carpenter continues: “Over the last year, in addition to creating new designs, Konstantin also curated the first design exhibition at the Serpentine Gallery in London. Just the fact that the Serpentine asked Konstantin to do this project demonstrates his unequaled international reputation for integrity and quality in the field of design. But even further, Konstantin’s specific selection of design objects represented a return to the roots of design during a time when market fluctuations were causing concerns over the future of the field.”

“As we discussed Grcic’s career as a jury, we kept coming back to how relevant his designs are to today’s world,” says Carpenter. “He has a remarkably strong body of work and because of that, he has the freedom to choose what projects he takes on. What’s inspiring is how he only does projects he believes in—his designs are never sensationalized; they are pieces that have the power to make the world a better place. A project like the MYTO Chair for instance not only utilized an advanced plastic in an entirely new way, but it did so by using the least amount of material possible. It made people re-think so many things: materials use, how cantilever chairs are designed, and environmental responsibility, to name a few.”

In keeping with Design Miami/ tradition, Grcic has created an installation for this year’s fair. His piece, entitled Netscape will be presented in an outdoor area in the courtyard of Design Miami/’s Temporary Structure designed by New York-based design studio Moorhead & Moorhead. Given flexible boundaries for the commission by Design Miami/, Grcic chose to create a functional work that visitors to the fair will be able to interact with directly. Playing off this year’s t

ent design, Grcic created a six-point star-shaped structure from which seats made of netting will be suspended. The hanging chairs will rock slightly when used by visitors and will create a space for guests to engage with one another before entering or leaving the fair. Netscape will seat 24 people at a time.

“When I first looked at the design for this year’s Temporary Structure, there was this beautiful part of the tent, just before the entrance,” says Konstantin Grcic. “I knew that I wanted to create something special for the fair—something functional, but also something that incorporated my ideas of what a place like Miami is like inDecember. The idea for the commission was fairly immediate because the tent design by Moorhead & Moorhead really lent itself to a project like this. It’s a space for people to enjoy.”

In conjunction with Netscape, a small exhibition of Grcic’s work will also be on display inside the fair, near the show’s entrance for Design Talks, the forum for exploring contemporary design practice and collecting. The works in the exhibition, chosen by Grcic himself, will include his favorites, along with seminal pieces from throughout his career. Among the designs on display will be the Blow Table for Established & Sons (2010), the Miura Bar Stool for Plank (2005), and the Tip Waste

Bin for Authentics (2003), among others. The fifteen works in the exhibiti

on will be placed on readymade modeling stands placed in front of large-scale digital images taken in Grcic’s studio.

“I wanted to create a display that celebrates the objects that allowed me to win this wonderful award,” says Grcic. “When you place furniture on the floor, people try it out. When you put it in a display like this, it changes the context. We chose to display these 15 pieces in front

of images of the studio as a way to invite people into our world. You see the ‘mess’ behind what we do, but also the inspiration.”

In honor of this year’s award, Design Miami/ has partnered with TheCrane.tv, the premium online video magazine for contemporary culture, to produce two bespoke films on Konstantin Grcic, the history of Design Miami/ and this year’s Netscape commission.

The videos, along with additional information can be seen at: