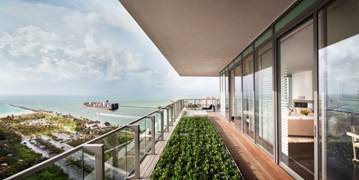 Design Center of the Americas (DCOTA) and Charles S. Cohen, Owner, CEO and President of Cohen Brothers Realty, are pleased to announce the Center’s newest exhibit, MonoVisioN, a selection of architectural and lifestyle photographs by distinguished photographer Scott Frances. A VIP reception celebrating the show’s opening will be held on Wednesday, November 16, 2011. 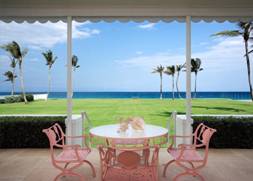 MonoVisioN, available for viewing in Atrium A until Wednesday, February 15, 2012, showcases 68 large-scale works reflecting the synthesis of Frances’ interests in carefully balanced composition. This precise  use of atmospheric and naturally motivated light is evidenced throughout the exhibit and in featured photographs of celebrity homes, including those of Jennifer Anistion and Estee Lauder, among others. With a journalist’s need to tell a story simply, along with his passion for the decorative arts, his imagery bridges recurring themes throughout art history.

The exhibition coincides with the release of Frances’ first monograph of the same title with an introduction by Richard Meier, published by Pond Press. In the preface to MonoVisioN, Meier states: “A Scott Frances photograph captures all these ephemeral elements that I have always explored in my architectural work. The images in this book portray the qualities that give every space and building a sense of place, and the constant dialogue between the man-made and the natural. MonoVisioN becomes an exploration of solid and void, transparency and opaqueness, the rational and the intuitive, and an essay on composition.” 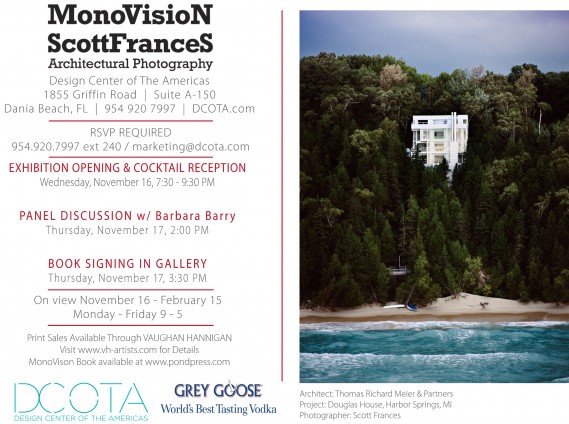 MonoVisioN’s arrival at DCOTA is its third stop on its tour through Cohen Design Centers. The exhibition launched at Pacific Design Center in West Hollywood in March 2011, was most recently on display at Decoration & Design Building Annex in New York, and will end its journey at the Houston location in spring 2012.

Scott Frances was born and raised in New York City, where he is currently based. He studied fine arts and journalism at Northwestern University in Evanston, Illinois. Early in his career he shot for ESTO photographics, under the auspices of the architectural photography great, Ezra Stoller. Following ESTO he began to document the work of architect Richard Meier, with whom he continues to work with today. Frances has worked with several of the world’s top architects and designers and is a regular contributor to magazines like Architectural Digest, Vanity Fair, The New York Times Magazine, and Departures. He has photographed the homes of such celebrities as Jennifer Aniston, Robert Duvall, Diane Keaton, Jim Belushi, Claire Danes, Clive Davis and Steve Jobs.

ABOUT DESIGN CENTER OF AMERICAS

For more than 20 years, Design Center of the Americas (DCOTA) has served the design community with the finest campus amenities and showrooms in the industry attracting world class designers, architects, design enthusiasts and their savvy clientele.

At nearly 800,000 square feet, DCOTA is the largest design campus of its kind. High design is showcased within more than 100 premier showrooms, catering to any home, yacht or office project.  Fine indoor and outdoor furniture, fabrics, flooring, lighting, kitchen, bath, antiques, accessories, appliances, window treatments, decorative hardware, paint and surfacing are just some of the resources found within the center.

Cutting edge programming, world-class amenities, and exclusive services offer a unique experience for the international array of visitors. DCOTA serves as the preeminent design destination to Florida, the Caribbean, and Central and South America as well as to seasonal travelers from around the world.  DCOTA is part of the Cohen Design Center quartet with sister locations in Manhattan (D & D Building), West Hollywood, California (Pacific Design Center), and Houston, Texas (Decorative Center Houston).