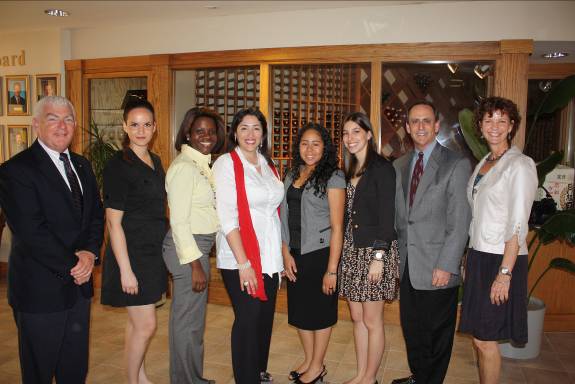 The Deborah L Natansohn Foundation is making a difference in the lives of young women who eagerly desire to pursue their lifelong dreams in the hospitality field. Recently the foundation provided tuition assistance scholarships to seven (7) deserving students of the Florida International University’s School of Hospitality and Tourism Management – the preeminent school training the next generation of hospitality leaders. The scholarships will contribute toward the students’ 2011 tuition.

The Foundation, established, in the name of cruise industry trailblazer Deborah L. Natansohn, who served as President of Orient Lines and Seabourn, honors Debbie’s memory.  The awards made possible by this program serve to continue her efforts in the advancement of women in society and business through mentoring programs, educational partnerships, scholarships and community outreach programs.

“The Foundation continues to impact the lives and careers of dozens of deserving women since its inception three years ago,” said Mitchell Schlesinger, vice president of the Foundation’s Board of Directors. “Each of these young women awarded scholarships are energetic, self-directed and have bright futures ahead of them in the tourism and hospitality industries.”

Debbie Natansohn was a groundbreaker in the travel industry, having been named the first female president at Orient Lines in 1998 and again at Seabourn Cruise Line after her instrumental efforts in overseeing the acclaimed introduction of the Queen Mary 2. In 2006 she was honored with a Glass Ceiling Award from the Jewish Museum of Florida and was named one of the top 50 women business leaders by the Center for Leadership at FIU.

Debbie passionately supported the advancement of women as the president of The Commonwealth institute of South Florida, a peer counseling group for executive women; she was also a member of the International Women’s Forum and a participant in the Miami-Dade School District’s Executive Partnership to advance School Success (PASS) program, which matches local executives with school principals to further the success of their schools.

The Foundation, established by her family and friends, is managed by Debbie’s family members, with her sister Rena Natansohn Epstein as Board Chairman. In addition to family and friends, the Board includes long time colleagues Mitchell J. Schlesinger, vice president of sales and marketing at Voyages to Antiquity, Joyce Landry, president of Landry and Kling and Andrea Corman, Director of Guest Services at Voyages to Antiquity.