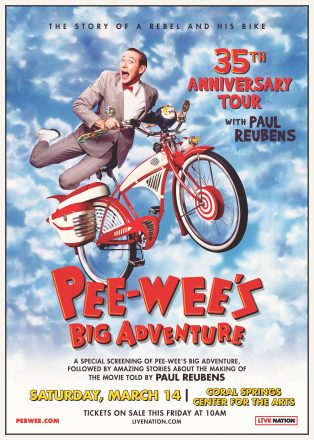 2020 marks 35 years since Paul Reuben’s classic, quirky sensation Pee-wee’s Big Adventure hit theaters. A critical and financial triumph at the box office, the 1985 comedy, Pee-wee’s Big Adventure, starring and co-written by Reubens grossed over $40M domestically and made Pee-wee Herman a household name. The movie marked the feature film directorial debut of Tim Burton and the first major studio film for composer Danny Elfman, beginning the now legendary filmmaking duo’s partnership which has resulted in 16 films over the last three decades. The movie is a timeless classic that continues to entertain and enthrall generations of fans to this day.

The 35th anniversary of the film is being celebrated with Pee-wee’s Big Adventure 35th Anniversary Tour with Paul Reubens including a show at the CORAL SPRINGS CENTER FOR THE ARTS on Saturday, March 14 at7:30PM. Each event will include a special screening of the film, followed by amazing stories about the making of the movie told by Paul Reubens.

Tickets start at $49.50 and go on public sale this Friday, December 13, by calling the Box Office at 954-344-5990or going online to www.TheCenterCS.com. Three levels of exclusive VIP packages will be available that include a ticket as well as a super secret gift, plus photo opportunity as well as a signed print. For further details visitpeewee.com.

To become a subscriber to the Coral Springs Center for the Arts and receive special notices about future concerts and shows, including the opportunity to buy advance tickets, please visit www.thecentercs.com/subscribe.