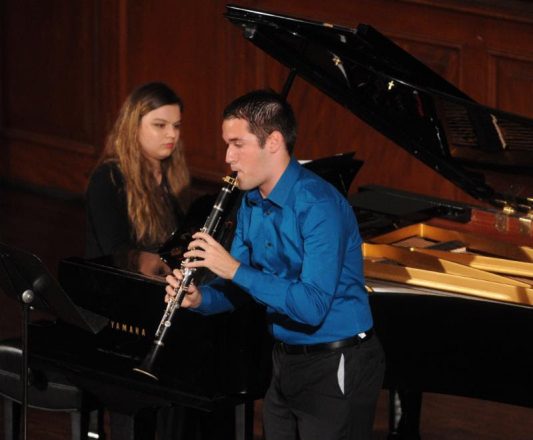 November 3; 3 PM
The skill of chamber music is considered one of the most important ones to cultivate. Students of the NWSA college music program deliver personalized interpretations of chamber music masterworks in this important College Chamber Music Recital. The program begins with Luigi Boccherini’s Piano Quintet in C major, which contains a charming variation on a Spanish Military theme. One must imagine sitting next to the window on a summer’s night in a Madrid flat and that the band can only be heard in the far-off distance in some other part of the city, so at first it must be played quite softly. Slowly the music grows louder and louder until it is very loud, indicating the Night Watch are passing directly under the listener’s window. Then gradually the volume decreases and again becomes faint as the band moves off down the street into the distance. The program continues with excerpts from Olivier Messaien’s Quartet for the End of Time, which was premiered in 1941. Messiaen wrote the piece while a prisoner of war in a German concentration camp, and it was first performed by his fellow prisoners. It has come to be recognized as one of his most important works.The concert concludes with Felix Mendelssohn’s chilling final String Quartet, Opus 80 in f minor, written after the death of his beloved sister, Fanny, and only two months before his own death at the age of 37.
November 3; 3 PM
Pinecrest Gardens
11000 South Red Road, Miami

Free and open to the public