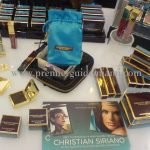 Christian Siriano fashion designer and youngest winner of the fourth season of Project Runway (2008) just partnered with Victoria’s Secret to retail his own makeup line. Christian Siriano for VS Makeup, the model Adriana Lima will endorse the make up brand.

This is not new to Christain Siriano who, among a lot of things (fashion show, line of low cost shoe for Payless Shoesource, fashion collection in partnership with Puma,.Bluefly, Firece Mamas…), has already worked as a free-lance make-up artist for Stila cosmetics.

After the recent launch of the makeup line with Victoria’s Secret in Los Angeles Christian Siriano the “breath of fresh air” of Victoria Beckham appeared in Miami Beach for a special event at Victoria’s Secret shop on Lincoln Road.

We could get few words from Christian Siriano quite busy during the all event well attended, a lot of women getting their makeup done on the spot, buying products of the new line and having the hero of the day signing autograph.

Q: You are already doing a lot of things in the fashion world what do you expect from this event?

A: “ Yes, I do a lot of different things, I love the fantasy of the creation, of designing, of “trying new things.With this event I am happy to see the immediate result of my work on “women using the makeup line, I wanted a makeup line wearable, accessible fashionable.

“I love to create and it works! Now I am very excited with the next New York fashion “week to work on and cannot wait for my style guide – How to be your most fabulous “self to be launched in October 2009.”

Few autographs and pictures later, Christian Siriano was already thinking about his next project.