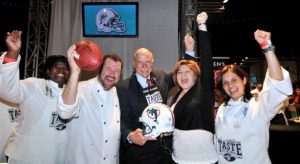 NFL Chefs to Battle It Out for a Good Cause in Taste of the NFL Chef Cook-Off
Judges at Airport Cook-off to Include Mayor Ken Keechl; Chef Allen Susser to Emcee

Several chefs from the Taste of the NFL, the annual charity event featuring chefs representing each NFL team, will participate in The Taste of the NFL Chef Cook-Off at Fort Lauderdale-Hollywood International Airport.

The Chef Cook-Off will help promote the 2010 Taste of the NFL event Feb. 6 at the Broward County Convention Center (www.TasteoftheNFL.com).

Emceeing the Chef Cook-Off will be Chef Allen Susser, who represents the Miami Dolphins and who has partnered with Delaware North Companies Travel Hospitality Services on Chef Allen’s 2 Go at the airport.