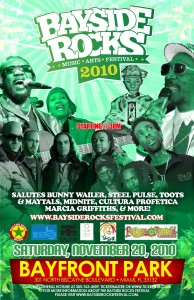 The Woodstock of Reggae!

More than half a million people, were held spell-bound for three days, in the small bucolic region of the Hudson Valley, known as Woodstock, NY. For three days, peace and music filled the atmosphere, with some thirty acts rising to the occasion to quench the thirst of the audience. For three days in the summer of 1969, people were bound together by musical energy and community spirit, the likes of which was so monumental- it continues to mystify us even today.

The convergence of acts such as Jimi Hendrix, Santana, Nash and young; as well as The Who, Joe Cocker, and Crosby coupled with the inherent spirit of the sixties and its mantra of Peace, Love and Harmony- created an effect that is yet to be duplicated, anywhere else in the world. Never before had there been such a magnificent outpouring of comradery and commality, which exemplified the true power of music, as it did on that day. Indeed, an entire generation of Americans (particularly), were transformed forever because of it. Your physical presence was not required, just knowing that such a thing was even possible- changes your world view, and challenges typical human perceptions of each individuals.

Reggae music has come a long way in its brief history; and has had occasion to be showcased in Woodstock. On this occasion however, the bar has been raised and the very nature of the concert being offered on the 20th of November 2010 at the Bayfront Park downtown Miami, is of legendary proportions. It has been generations since a line-up of reggae giants, which includes- three time Grammy Award winner, the Legendary Bunny Wailer of the Wailers; Grammy Award winning band Steel Pulse, The Grammy winner who coined the word “Reggae” himself Toots & The Maytals, 100 % Roots Rock reggae from out of St. Croix Midnite, and San Juan Puerto Rico’s own Cultura Profetica, as well as Marcia Griffiths of the original Bob Marley & The Wailers’ I-Threes; – been presented together on the same stage.

This concert is dubbed to be “a once in a lifetime experience”, as the Bayside Rocks Festival salutes them all, as each artist has very successful individual careers and has not had occasion to perform together in a very long time. Bayfront Park is a place that is revered in history, and coupled with these pioneers in reggae music, the experience promises to be one that touches generations to come. The Woodstock of reggae is upon us on Saturday November 20th, Downtown Miami, Bayfront Park.

Never 2BZ, Inc is proud to announce the inaugural Bayside Rocks Festival, featuring an eclectic line up of international music genres. Over the course of the day, Bayside Rocks Festival will bring over 10,000 people to Downtown Miami. This highly anticipated cultural event was designed to cater to all genuine cultural expressions in a celebration of unity, love and hope.