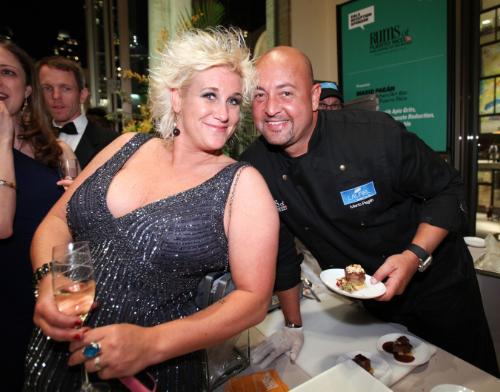 Rum.  It’s not just for cocktails and desserts anymore.

Renowned San Juan chef Mario Pagan let rum shine when demonstrating the versatility and flavor of Puerto Rican rums last night at the 2011 James Beard Foundation Awards.  The exhibition was sponsored by Rums of Puerto Rico, the umbrella marketing group for the collection of the world’s finest rums.

“Puerto Rican rum adds sweetness and richness to a dish in a way that is far more complex than wine, vodka or beer,” said Chef Pagan, the proprietor of LAUREL Kitchen: Art Bar and Lemongrass in San Juan and a contestant on last season’s “The Next Iron Chef” on the Food Network. “As tonight’s menu shows, rum pairs so well with many different ingredients – from sweet to salty or spicy – and is not at all exclusive to Puerto Rican cooking.”

The Rums of Puerto Rico reception sponsorship was part of the government’s efforts to promote the fact that rum can be used for more than cocktails and traditional desserts.  By using Puerto Rican rums, chefs can create a variety of new dishes and give classics an exciting new twist.

“The James Beard Foundation Awards are the symbol of culinary excellence and attract the top chef and restaurateurs in America,” said Nicole J. Rodriguez, director of Rums of Puerto Rico. “The reception was the perfect opportunity to show an elite food audience how Chef Pagan enhanced the character of traditional appetizers, sides and entrees by adding premium-quality rums from Puerto Rico.”

Similar to wine, rum takes on characteristics of the environment in which the sugarcane is grown and the liquor produced.  Taste rum and you’ll perceive notes of citrus, caramel, chocolate, apricots, banana or vanilla.

Puerto Rican rums hold up better against strong ingredients and are superior to other rums for three reasons: the Island’s centuries old tradition of rum making; the legally-mandated, one-year aging in white oak barrels; and the Island’s commitment to excellence. Puerto Rican rums are also produced using molasses.  It ensures that Puerto Rican rums taste better compared to other rums that use only sugar cane juice and guarantees a quality product. The result: Puerto Rican rums – including Bacardi, Don Q, Ron Llave, Ron del Barrilito and Palo Viejo – comprise more than 70 percent of the rum sold in the United States and are the best selling rums in the world.

To tell its story, Rums of Puerto Rico is reaching out to foodies through a multi-faceted campaign.  In addition to print, digital and out-of-home advertising in New York City, Washington, DC and Miami and in industry trade publications, the campaign is supported by public relations and social media efforts and an upgraded web site (www.rumcapital.com). Rums of Puerto Rico is also executing a series of events and partnerships throughout the year, including sponsorship of this year’s Taste of the Nation in New York, the Miami Rum Renaissance Festival and the Taste of Rum in San Juan.

“Puerto Rico’s rums are not just a culinary ambassador for Puerto Rico, they are also an important economic driver for the island’s economy,” Rodriguez added.   “Whether it is our Island’s beautiful beaches, our superior rums or the many other goods and services produced by our friendly, bilingual workforce, we want Americans to say the same thing when they think about Puerto Rico: Puerto Rico equals quality.”