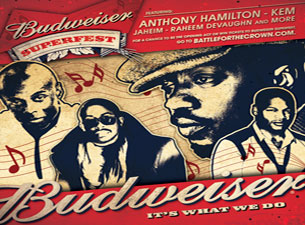 The Budweiser Superfest , an ’80s R&B touring staple is the anticipated powerhouse tour of the summer.  It comes to the Waterfront Theater at the American Airlines Arena in downtown Miami on Thursday August 19.  The show features Anthony Hamilton, KEM, Jaheim and Raheem DeVaughn with more to be announced.

Attracting fans right from the start, Anthony Hamilton’s unique voice draws its soulful force and story-telling inspiration from such pioneers as Bill Withers, Bobby Womack, Al Green and Marvin Gaye. Instead of taking a cookie-cutter approach, however, Hamilton, with that distinctive, six-time Grammy-nominated voice, paved his own road to fame. Hamilton‘s career-molding break arrived in 2002 when he sang the infectious hook on the Nappy Roots’ “Po’ Folks.” That performance netted the singer his first Grammy nomination for best rap/sung collaboration. A year later his platinum debut, Coming From Where I’m From was released. It was followed by the gold-certified Ain’t Nobody Worryin’.

A live performer who commands the stage with his soulful vocal ability and captivating stage presence, KEM promises to deliver a standout live experience not to be missed. In addition to revisiting popular classics such as “Love Calls” and “I Can’t Stop Loving You,” the Detroit native will also showcase his new single, “Why Would You Stay,” plus other songs from his third studio album, Intimacy.