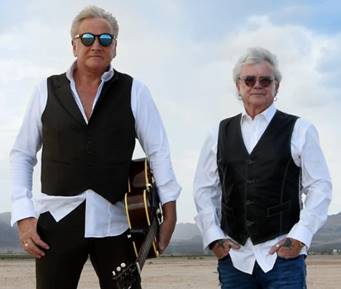 The pop rock duo Air Supply will perform in The Pavilion at Seminole Casino Coconut Creek on Friday, July 19, at 8 p.m.

Tickets priced at $35/$45/$55 per person are on sale now via Ticketmaster locations, online at Ticketmaster.com, or by calling 800-653-8000. The Pavilion box office will also open at 1 p.m. on the day of the show for on-site ticket purchases and will-call pickup.

Air Supply is made up of English singer-songwriter Graham Russell and Australian lead vocalist Russell Hitchcock.

The duo has recorded a plethora of hits, including eight top 10 hits in the U.S. Among the songs that have achieved multi-million plays on the radio include “Lost in Love,” “All Out of Love,” “The One That You Love,” “Sweet Dreams,” and “Making Love Out Of Nothing At All.”

Air Supply recently performed their 5,000th concert in Las Vegas. They perform about 130 concerts each year around the world and are more popular than ever live. In over 44 years, Russell and Hitchcock have never had a real argument.

They first met in 1975 during rehearsals for “Jesus Christ Superstar” in Sydney, Australia and became instant friends with their common love for The Beatles and, of course, singing.

Russell and Hitchcock quickly gained a reputation for great harmonies and for original songs that Russell was constantly writing. They made a cassette demo of two songs: “Love and Other Bruises” and “If You Knew Me,” and presented it to every record company in Sydney. Every one turned it down but one — CBS Records — which admired their unique style.

During one afternoon, Air Supply wrote a single, “Lost In Love,” and it shot to number one on the national charts. Air Supply was instantly born. That same year, they opened for Rod Stewart across Australia and then throughout the U.S. and Canada.

It was not until music industry executive Clive Davis signed Air Supply to Arista Records in 1980 that the group rose to stardom in the U.S. Subsequently, “Lost in Love” became the fastest-selling single in the world, leaping to the top of all of the charts. Their second single, “All Out of Love,” climbed the charts even quicker.