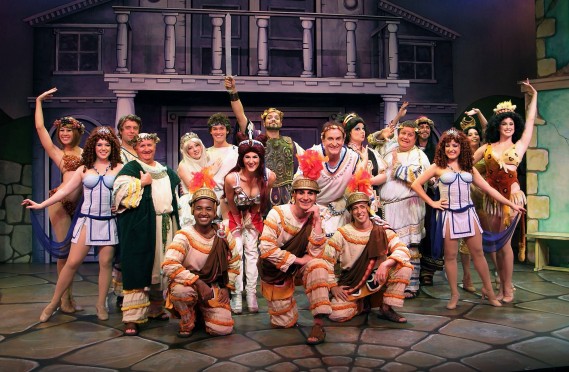 “A Funny Thing Happened on the Way to the Forum,” the widely acclaimed, multiple Tony Award-winning musical, will open at the Miami Beach Stage Door Theatre at the Byron Carlyle on Friday, October 14, with matinee and evening performances through November 13.

The show made its Broadway debut in 1962 with music and lyrics by a relative newcomer, Stephen Sondheim. Based on a book by Burt Shevelove and Larry Gelbart, it was inspired by the farces of ancient Roman playwright Plautus. That first engagement, comprised of almost 1,000 performances, has been followed by several revivals as well as a movie.

“A Funny Thing Happened on the Way to the Forum” has earned Tony Awards for Best Musical, Best Actor, Best Supporting Actor, Best Book and Best Director.  In fact, every actor who has starred in the musical – Zero Mostel, Phil Silver, and Nathan Lane – has won a Tony.

The plot of “A Funny Thing Happened on the Way to the Forum” is simple:  a slave named Pseudolus tries to earn his freedom by helping his young master, Hero, win the hand of the comely (and, of course, virginal) courtesan Philia, betrothed to another. The ensuing machinations, including gender-crossing disguises and cases of mistaken identity, are both mind-boggling and side-splitting.  The running satirical commentary on social class is as relevant as ever.

In the Miami Beach Stage Door production, the lead role of Pseudolus is reprised by Dan Kelley, a 25-year veteran of South Florida theater, Silver Palm award-winner for Best Actor/Best Director in a Musical and Carbonell-nominated for Actor and Director.  Other cast members include Shane Tanner as Miles Gloriosus, Ken Clement as Senex, Lauren Cupples as Philia, Andrew Betz as Hero, Rachel Lomax as Gymnasia, Sarah Lichty as Vibrata and Ricky Dain Jones as Hysterium.

“A Funny Thing Happened on the Way to the Forum” is presented by Derelle Bunn and David Torres, co-founders and executive producers of the recently-opened Miami Beach Stage Door Theatre.  With the new theatre housed in the Byron Carlyle, the pair continues their 19-year tradition of producing award-winning musicals at the Broward Stage Door Theatre, their flagship theatre in Coral Springs.

“A Funny Thing Happened on the Way to the Forum” Performances:

DiSh – Dinner and a Show

The City of Miami Beach has launched “DiSh,” the moniker for Dinner and a Show, a program in which participating restaurants near the Miami Beach Stage Door Theatre offer ticket holders a 15 percent discount on their lunch or dinner simply by presenting their ticket or ticket stub.  Miami Beach residents also receive a 10 percent discount on tickets at theatre. For the “dish” on participating restaurants, log on to www.mbculture.com/dish.