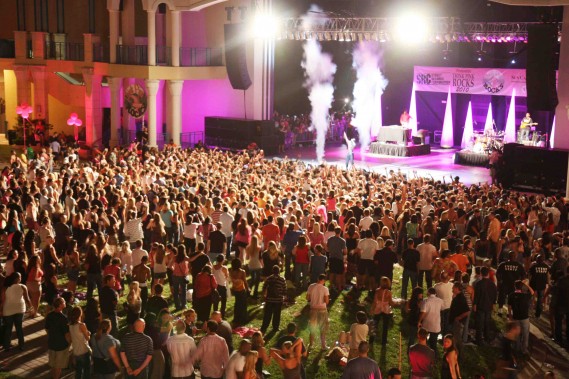 Think Pink Rocks, (www.thinkpinkrocks.com) a non-profit 501 (c)3 organization dedicated to the early detection of breast cancer and awareness of the BRCA gene for breast and ovarian cancer.  Think Pink Rocks is based in Boca Raton, Florida.

WHERE: Count de Hoernle Amphitheater at the Centre for the Arts at Mizner Park, Boca Raton, FL

TICKETS: Tickets can be purchased at www.thinkpinkrocks.com.  Prices are as follows:

Wyland Living Green Fair only: Adults, $12, children 10 and under, $5 (purchase fair only tickets at www.livingreenfair.com).

BACKGROUND: In 2004, at age 36, Stephanie Robin, a Boca Raton mother of two small children, was diagnosed with stage II breast cancer.  She tested positive for the Breast Cancer Gene (BRCA) and underwent a double mastectomy with reconstruction, a total hysterectomy and months of chemotherapy.  The cancer returned to her lungs and is stage IV; she is receiving monthly treatment at Memorial Sloan- Kettering and the tumors have decreased in size by 90 percent.

She and her friends Elizabeth Weprin, Kathy Fleishman and Amy Seidman established Think Pink Rocks.  Working with Steve Rifkind, Chairman of SRC Records/Universal, and producer, Kelley Lee, for the fourth year they have organized the Think Pink Rocks concert to advocate for early detection of breast cancer, to raise awareness of the BRCA gene for breast and ovarian cancer, and to raise funds for breast cancer research charities.  For more information please visit www.thinkpinkrocks.com.