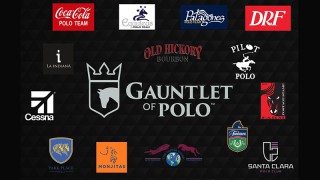 Following a remarkable 2019 GAUNTLET OF POLO™ debut, the United States Polo Association (USPA), USPA Global Licensing (USPAGL) and International Polo Club Palm Beach (IPC) are pleased to announce the 14 teams that will contend for the trophy in 2020. Taking its place as the pinnacle of American high-goal, GAUNTLET OF POLO™ produced a record number of teams and fiercely competitive games, crowning an inaugural champion in its first year.

The positive reception of the GAUNTLET has not only attracted new teams, but has highlighted the world-renowned International Polo Club Palm Beach as a destination for players and spectators alike. Reigning GAUNTLET OF POLO™ Champions Pilot are among the 14 teams, seeking to defend their title and secure the $1,000,000 prize money purse in 2020.

“We are proud to have set into motion a tournament series which encapsulates the very best of polo competition in the United States for both players and spectators,” said Robert Puetz, CEO of the United States Polo Association. “The eyes of the polo world will soon turn to the International Polo Club Palm Beach to witness many of the best players and polo teams in the world vying for a chance to take home the $1,000,000 purse and earn the honor of being a GAUNTLET Champion.”

The 2020 GAUNTLET OF POLO™ will begin February 1-23, with the C.V. Whitney Cup, continue with the USPA Gold Cup®, February 22-March 22, and conclude with the illustrious U.S. Open Polo Championship® March 21-April 19. The prize money format will guarantee $125,000 to each of the winning teams of the C.V. Whitney Cup and the USPA Gold Cup® and a $250,000 prize for the winner of the U.S. Open Polo Championship®. Additionally, any team who wins all three tournaments consecutively will be awarded a $500,000 bonus, for a total of $1 million in prize money and crowned as the GAUNTLET Champion.

All three tournaments will be livestreamed on the USPA Polo Network on Facebook, YouTube, Twitter and uspolo.org. The U.S. Open Polo Championship® Final will be aired to millions of viewers on CBS Sports on April 26 at 2:00pm ET. For more information on the GAUNTLET OF POLO, please visit uspolo.org/gauntlet-of-polo. Tickets for all GAUNTLET OF POLO™ games on the U.S. Polo Assn. Field will be available for purchase beginning mid-October.