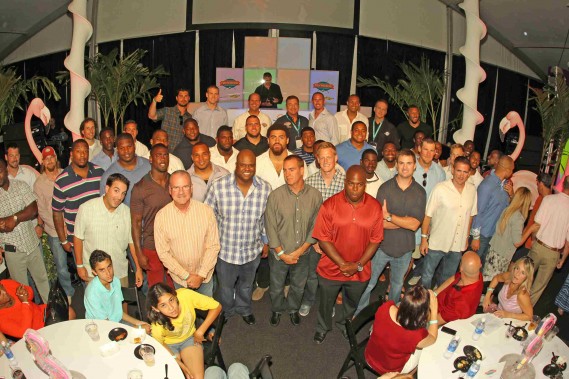 The Miami Dolphins Foundation raised more than $700,000 for local charities as part of FinsWeekend, the foundation’s largest annual event featuring current players, alumni and cheerleaders which was held on May 16-18, 2013 at Turnberry Isle and the Miami Beach Marina.

“I don’t think there is anything like this in sports,” said Miami Dolphins CEO Mike Dee. “Fins Weekend gives us the opportunity to provide the financial basis for us to do things in South Florida throughout the year. This puts us in a position to fulfill the commitment we have to make a difference in the community.””

All proceeds from FinsWeekend benefit the Miami Dolphins Foundation. The event has raised more than $3 million for local charities. The festivities begin on Thursday, May 16, with the Celebrity Draw Party at Turnberry Isle. The event included cocktails, hors d’oeuvres and interactive games such as putting, chipping, pitch shot and sand shot for unique prizes.

After the tournament all participants took part in a luncheon presented by Doctors Hospital to announce the winners. Later that evening, the popular Hook & Tackle Captain’s Party took place at the Miami Beach Marina with over 1,200 participants taking part in the event.

On Saturday, May 18, amateur and professional anglers met at the Miami Beach Marina for the Miami Dolphins Foundation Fishing Tournament presented by the South Florida Chevy Dealers.  Chevy’s Showtime outweighed Cheesie Fishing by 22.6 pounds to claim the top overall prize. More than 400 anglers participated in the tournament that saw over nine million social media mentions on Facebook, Twitter and Instagram at #FinsWeekend. After the tournament, everyone gathered for the Scott Financial/HMY Yacht Sales awards ceremony where the award winners were announced. At the ceremony, fans also got the chance watch a live auction with great prizes including a 21 Foot Contender.

“We had over 80 boats and it was a beautiful day weather wise,” said Fins Weekend Chairman Jeff Peck. “We had a lot of big fish at the Hooters Weigh-In at the dock and we raised a great deal of money for our foundation that will greatly impact the South Florida community.”

For more information about Fins Weekend and other charitable events hosted by the Miami Dolphins, please call the Community Relations department at (305) 943-7200 or visit dolphins.com.