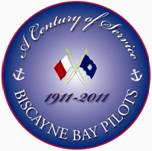 The Biscayne Bay Pilots Association, the association of harbor pilots serving the Port of Miami’s maritime traffic needs and a member association of the Florida Harbor Pilots Association, today announced that 2011 marks 100 years of collaboration with the City of Miami and Miami-Dade County in the growth of the local maritime industry. To commemorate the occasion, the pilots have published a history book, authored by Captain Andrew D. Melick, chronicling their role in the events that led to the establishment of Miami as a port town at the turn of the 20th century and the evolution of the city and its seaport ever since. The book is edited by Miami historian Dr. Paul George.

“Forty-four harbor pilots have played an intricate role in the development of Biscayne Bay as a major seaport over the last century,” said Captain John Jacobsen, chairman of the Biscayne Bay Pilots Association. “We are honored to be celebrating our collaboration with the Port of Miami and our contribution to the safety, environmental integrity and economic development of this beautiful port city.”

There are currently 16 pilots serving within the association, all of whom graduated from federal or state maritime academies and sailed on oceangoing vessels for many years, typically a decade or more, before training to become harbor pilots. Most of them hold unlimited master’s licenses in the merchant marine.  Harbor pilots in Miami have safely handled the navigation of hundreds of thousands of ships during the last century; they currently pilot approximately 7,000 ships sailing in and out of Biscayne Bay annually. Miami pilots stand 12-hour watches on a rotating schedule and are open for business 24 hours a day, 7 days a week, 365 days a year.

“The Port of Miami joins the Biscayne Bay Pilots in celebrating their anniversary of service to the seaport,” said Port Director Bill Johnson. “We count on the pilots to assist us with seaport development, new ship operations and port security by providing their expertise in planning the seaport’s growth.”

Approved improvements at the port, including a roadway connecting the port to the Macarthur Causeway via a tunnel under the Main Channel, dredging the channels to a depth of 50 feet, and upgrades to the port’s rail connections, will make Miami one of only three East Coast ports that can accommodate “post-panamax” container ships. Harbor pilots within the Biscayne Bay Pilots Association have trained extensively to handle these mammoth ships as part of their commitment to continue serving the ever-evolving maritime transportation industry in Miami.

“This centennial occasion serves not only to review our history but also to look forward to the future,” said Captain Melick, author of the book “A Century of Service, A History of the Biscayne Bay Pilots.” “We have been a part of every milestone marking the development of Biscayne Bay as a seaport, and we will continue to be an integral link in the chain of progress.”

In the latter part of the 19th century, prompted by port stakeholders, pilots throughout the United States began to associate themselves in local groups, pool their resources and coordinate their work schedules in order to ensure the availability of a pilot, the efficient flow of port traffic and the safety of vessels.

Pilotage by expert shiphandlers became compulsory in Miami in 1911 when the State of Florida first issued pilot licenses to Captains William McIntyre, John Sands and Henry Warren, the founding members of the Miami Bar Pilots Association, as the association was then known.  State regulation of piloting guaranteed that the primary responsibility of the pilot would be to protect the safety of the citizens, the economic interests of the state and the integrity of the coastal environment from the damaging effects of ship collisions and groundings.

Currently, there are 97 highly-skilled and highly-trained harbor pilots serving Florida’s 14 deepwater ports, all of whom trained for a minimum of two years in their respective ports before handling ships on their own.  In a recent three-year period, Florida harbor pilots controlled the navigation of approximately 90,000 ships in Florida’s seaports, compiling an outstanding safety record.