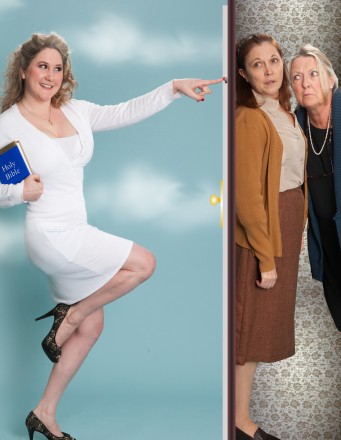 Zoetic Stage and the Adrienne Arsht Center for the Performing Arts of Miami-Dade County proudly present the Miami premiere of Evan Smith’s critically-acclaimed play THE SAVANNAH DISPUTATION. Playing April 11 – 28, 2013 in the intimate Carnival Studio Theater (Ziff Ballet Opera House), THE SAVANNAH DISPUTATION is the final show in Zoetic Stage’s 2012-2013 season and the final installment of the Arsht Center’s 2012-13 Theater Up Close series.

Tickets to THE SAVANNAH DISPUTATION are $45*, and may be purchased through the Adrienne Arsht Center box office by calling (305) 949-6722, or online at www.arshtcenter.org.

THE SAVANNAH DISPUTATION, directed by Zoetic Stage artistic director Stuart Meltzer, takes place in a house on Duffy Street near Skidaway in Savannah, GA. Two feisty Catholic sisters, played by Silver Palm and Carbonell Award-winning actresses Barbara Bradshaw and Laura Turnbull, find themselves in a verbal smack down with a young door-to-door Pentecostal missionary (Lindsey Forgey) in their own home. To fight back, the sisters enlist the help of their unsuspecting parish priest (John Felix), setting the stage for a hysterical theological showdown about what it means to truly believe.

Zoetic Stage Artistic Director Stuart Meltzer says, “Zoetic Stage is excited to bring this wonderfully funny and though-provoking play to the South Florida community.  Featuring a stellar ensemble cast and creative team, this production will engage audiences with its humorous debate on faith and belief.”

“It is an honor to end our second Theater Up Close season with our ongoing artistic collaborators at Zoetic Stage,” said Scott Shiller, Executive Vice President of the Adrienne Arsht Center. “In its much-anticipated Miami premiere, Zoetic’s production of THE SAVANNAH DISPUTATION exhibits the irrational idea of trying to bully others into accepting one’s beliefs in a hilarious manner. The play’s ensemble of Barbara Bradshaw, Laura Turnbull, Lindsey Forgey, and John Felix, coupled with Evan Smith’s trademark wit and depth of character will surely make for a memorable performance filled with side-splitting moments.”

Evan Smith (Playwright) was born and raised in Savannah, Georgia. His play Servicemen was produced by the New Group in New York City and New York Stage and Film in Poughkeepsie. Both The Uneasy Chair and Psych were produced by Playwrights Horizons in New York City. The Uneasy Chair was revived by the Writers’ Theatre in Chicago and also by 1812 Productions in Philadelphia, who produced the world premiere of his Daughters of Genius. The Savannah Disputation was premiered by the Writers’ Theatre in the fall of 2007. His TV pilot “Debs” was produced onstage in Los Angeles by Naked TV, a joint venture of Fox TV and Naked Angels. His plays have been published by the Grove Press, Dramatists Play Service, Inc., Smith & Kraus, Dell Books, and Playscripts.com. He is a recipient of a 2002 Whiting Award. He has a BA in English from Vassar College and an MFA in playwriting from the Yale School of Drama.

Stuart Meltzer (Director, Sound Design) is the Artistic Director and a founding member of Zoetic Stage. He returns to the Arsht Center’s Carnival Studio Theater after directing this season’s Zoetic Stage production of the critically-acclaimed, Carbonell Award nominated I Am My Own Wife and Zach Braff’s All New People. Last season, Meltzer directed Zoetic Stage’s Moscow which garnered a Carbonell Award nomination for Best New Play in 2012, The Santaland Diaries, and the world premiere of Captiva, for which he received a Carbonell Award nomination for Best Director of a Play. In 2010, he directed Zoetic Stage’s critically-acclaimed inaugural production of South Beach Babylon. Previously, Meltzer served as Artistic Director of City Theatre in Miami for two years, where he oversaw and expanded the Summer Shorts Festival at the Arsht Center. His New York credits include Romulus Linney’s Gint, Harold Pinter’s One for the Road, Aristophanes’ Lysistrata, and Ntozake Shange’s For Colored Girls Who Have Considered Suicide When the Rainbow Is Enuf, as well as Morzek’s Striptease. Upon returning to his native South Florida, he was Head of Theatre at Gulliver Preparatory and then served on the faculty of New World School of the Arts for two years. Meltzer earned his M.F.A. in Directing from the Actors Studio and his B.F.A. from New World School of the Arts in Miami. Meltzer is a 2012 recipient of the Silver Palm Award.

Barbara Bradshaw (Mary) previously appeared in Zoetic Stage’s acclaimed play Captiva in 2011. Barbara recently finished a run of Other Desert Cities at Actor’s Playhouse. This fall she appeared with Flat Rock Playhouse in NC in the brand new Frank Wildhom musical Zelda, Cat On A Hot Tin Roof directed by Marcia Milgrom Dodge and Noises Off! During her long career, Barbara has appeared in well over 200 productions with theater companies in Florida and across the country: Geva Theatre; Alliance Theatre; Capital Rep; Florida Studio Theatre; PBDramaworks; 15 seasons with the Caldwell Theatre Co.; Broward Center; Kravis Center; Adrienne Arsht Center; Flat Rock Playhouse, N.C.; Coconut Grove Playhouse; Mosaic Theatre; and more. Next up, she will be seen in GableStage’s Good People. She has been honored with the Silver Palm Award, the prestigious Los Angeles Drama-logue Award, and four Carbonell Awards.

John Felix (Father Murphy) recently appeared in The Music Man, as Mayor Shinn, at the Maltz Jupiter Theatre, where he previously played Herr Schultz in Cabaret. Other recent roles include Father in Black Tie; Mr. Laurence in Little Women: The Musical, opposite Donna McKechnie; Bellomy in The Fantasticks; and Harvey in a tour of Breaking Up Is Hard to Do, based on the music of Neil Sedaka. This production marks John’s debut with Zoetic Stage.

Lindsey Forgey (Melissa) is originally from Chattanooga, TN and is making her Zoetic Stage debut. Since graduating with a BFA in musical theater from New World School of the Arts, she has worked in some of South Florida’s most reputable theaters and has become a proud member of Actors’ Equity Association. She was most recently seen as Sweetheart in The Theatre at Arts Garage’s production of Exit, Pursued by a Bear and has previously appeared at the Arsht Center in Summer Shorts and Rock Odyssey. In addition, Lindsey is part of the Insight for the Blind in Fort Lauderdale, where she produces audio recordings of books and magazines for the blind and physically handicapped for the Library of Congress and their Talking Books program.

Laura Turnbull (Margaret) recently appeared in A Delicate Balance at Palm Beach Dramaworks and Becky’s New Car at Actors’ Playhouse. In addition to Broadway, Off-Broadway, national tours and regional theater, Laura has worked at nearly every professional theater in South Florida and is a longtime member of Actors’ Equity Association. She has received numerous Carbonell Award nominations, winning multiple times for Best Actress, as well as receiving the Curtain Up and Silver Palm Awards. This production marks Laura’s debut with Zoetic Stage.