The Polo Life, LLC announces the seventh annual AMG Miami Beach Polo World Cup presented by Nespresso, the world’s largest and most prestigious Beach Polo tournament, taking place from April 21st to April 24th between 20th and 22nd Streets on the sands of South Beach, featuring South Florida native, veteran Polo player and renowned presenter of America’s Most Wanted, John Walsh.  AMG, the performance brand of Mercedes-Benz, returns for the second year as Title Sponsor and is displaying a stable of its own high performance vehicles alongside the well-trained thoroughbred horses.

The four-day, world class sporting event features top polo players from around the world competing in two tournaments for both men and women.  The AMG South Beach Women’s Polo Cup Presented by Nespresso is the third annual ladies beach polo tournament, taking place on Thursday April 21st featuring eight women’s teams in a one-day series of round-robin championship matches.  Mercedes-AMG is the proud sponsor of the AMG men’s and women’s polo teams that include some of the world’s top-ranked players.  Top Brazilian model, Paula Chermont, will be competing for a second year, and the game’s number one female player, Sunny Hale, will play for the AMG women’s team. 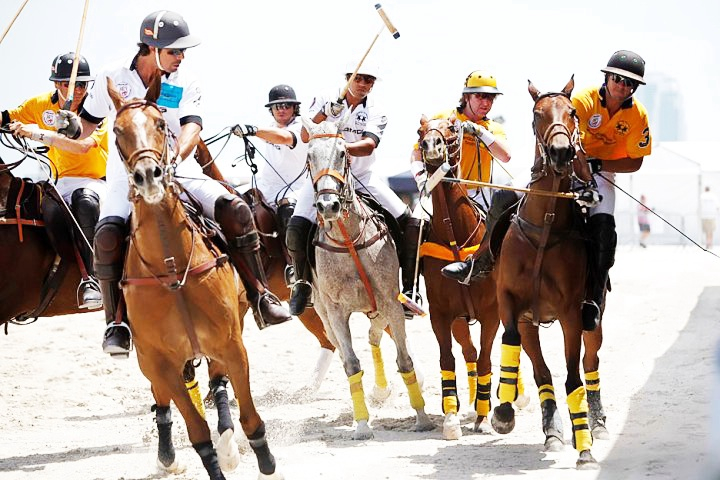 The AMG Miami Beach Polo World Cup is a three-day men’s tournament, now in its seventh year, starting on Friday, April 22nd through Sunday, April 24th, culminating in the highly acclaimed championship final at the end of the week.  The six men’s teams will feature some of the world’s top-ranked players including the iconic Nacho Figueras, as well as Luis Escobar and the number one U.S player, Nic Roldan.  Selected as part of the AMG Men’s Polo Team is John Walsh, presenter of America’s Most Wanted and spokesman for The National Foundation For Missing and Exploited Children – one of the participating charities at this year’s AMG Miami Beach Polo World Cup. Walsh will be making his inaugural appearance at the AMG Miami Beach Polo World Cup as a participating rider and AMG-Mercedes team member, alongside Tommy Biddle, who is currently the highest ranked Arena Polo player in the U.S. John Gobin, a five-time US polo team member will be playing with Lance Vetter and Gringo Colombres from Argentina.

“I am very excited to be part of this year’s AMG Miami Beach Polo World Cup,” says Walsh.  “As a long-time Polo enthusiast and player, I am very much looking forward to competing for the first time in this year’s tournament alongside some of the best players in the world.  The event will help raise awareness for The National Foundation For Missing and Exploited Children and hopefully aid in our mission to help prevent child abduction and sexual exploitation. The Foundation continues to help with saving the lives of children for over 25 years.”

Attendees at this year’s AMG Miami Beach Polo World Cup will experience a host of musical and visual entertainment, including fashion shows by La Martina and Blank Silk by Meghan Walsh, the talented daughter of John Walsh, along with live concert performances, VIP parties and public events throughout the tournament.  For this year’s AMG Miami Beach Polo World Cup, AMG-Mercedes has formed a unique partnership with designer La Martina for the creation of a special edition commemorative polo shirt for the tournament that will be on-sale at the La Martina retail tent over the four days. All proceeds from the sales of the polo shirt will go to Big Brothers Big Sisters of Greater Miami, the tournament’s official partnering charity organization, as well as a portion of funds raised from this year’s ticket sales.

“The AMG Miami Beach Polo World Cup is not only a highlight of the social season, but a must-see event that is now a staple on the annual sporting calendar,” said Bruce Orosz, President and Co-Founder of The Polo Life, LLC.  “The tournament has become a major attraction to general enthusiasts and Polo aficionados alike, who come to enjoy a sport steeped with tradition in a setting that is world-renowned, bringing considerable media attention through its appeal to the South Florida tourism industry.”

The traditional post-event awards ceremony will be held at the end of each tournament to commemorate both women’s and men’s competition winners, during which John Walsh, along with sponsor representatives from Mercedes-AMG and Nespresso, will present trophies to the men’s and women’s World Cup finalists.

General admission to the AMG Miami Beach Polo World Cup presented by Nespresso and adjoining AMG Miami Beach Polo Retail Village is free, and concessions will be available for purchase. A limited number of VIP tickets are also available for purchase. The VIP Tickets allow entrance to the shaded Grandstand, where free food and drinks are served. Ticket prices are $100 for Thursday, April 21st, $130 for Friday, April 22nd and $150 for Saturday and Sunday, April 23rd and 24th. Children 12 to 18 pay half the adult ticket price and children younger than 12 receive free admission. A percentage of all ticket sales will go to Big Brothers Big Sisters of Greater Miami, the tournament’s official charity partner for a second year.

For more information on the tournament and the events or to purchase VIP tickets, visit www.miamipolo.com or call 305-538-3809.