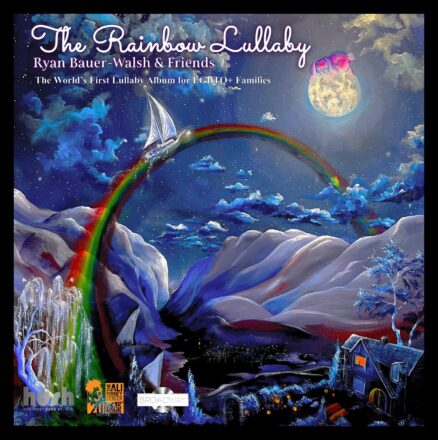 Featuring LGBTQ+ Broadway stars performing numbers from the album. All proceeds from the event will go to The Ali Forney Center.

This event will be emceed by Sutton Lee Seymour and Brita Filter and will include performances by Madge Dietrich (Kinky Boots), Ernie Pruneda (Sister Act), Richie Leone (PROJECT LEONE), Jonathan D. Burke (HARLEM), Jamie Cepero (SMASH) and album creators Ryan Bauer-Walsh and Fred Sauter. Queer activist speaker Jason Rosenberg will also be addressing the crowd to rally the community to fight the over 200 pieces of anti-LGBTQ+ legislation filed in the last 6 months.

“238 anti-LGBTQ+ bills have been filed in less than three months of this year. It is crucial that we create visibility for queer families in the march towards equality as we fight this fascist legislation.” said Bauer-Walsh, adding This album is the first of it’s kind despite LGBTQ+ families having existed as long as lullabies.  It is time to ensure the protection of LGBTQ+ citizens and families- it is time to rally once again as a community to protect our families!”

Hush HK has offered their space for the Rainbow themed benefit, and will be donating 10% of the bar tab to The Ali Forney Center.

“The creation of queer cultural traditions is a part of arts activism and acts of protest through demonstrations of love, empathy and family are a crucial part of our way forward.” Said associate producer Fred Sauter.

The event is open to the public with tickets being reserved in advance at https://www.eventbrite.com/e/the-rainbow-lullaby-album-release-rally-fundraiser-tickets-321485430577 with a recommended donation of 20 dollars. Donations of 20 dollars and over will receive a signed limited edition CD.