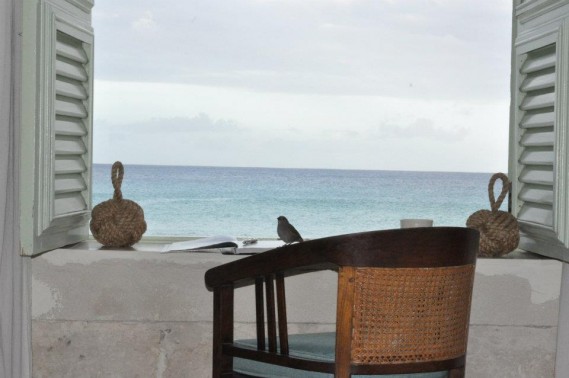 While Miami was a buzz with a frenzy of activities that would leave you dizzy surrounding the SOBE Wine and Food Festival, the excitement around the arrival of New York Knicks basketball player Lin, and President Obama’s visit to the University of Miami, we wanted to be far removed from that chaos. So we jetted off to Barbados.

Looking in on Barbados one would imagine that it’s just another Caribbean island that boasts sand, sun and sea. But there is so much more to Barbados than it’s white sandy beaches and penetrating sunshine.

Barbados can be viewed as the little British Isle with parishes, streets, ports and towns that reflect their English heritage. It is quite understandable why Barbados attracts many European and Canadian visitors as well as movie stars and political celebrities. Simon Cowell (X Factor), Actress Catherine Zeta Jones with her husband actor Michael Douglas, and others call the island home. Singing superstar, Rihanna grew up on the island and now serves as Ambassador.

Barbados has a treasure trove of activities, cultural explorations along its shore, a history of independence and colonial inheritance which lie between its sugar cane fields and an international and superior culinary offerings that rivals the Caribbean. After all, they were the first and only Caribbean island with a Zagat rating and several others thereafter.

With all the wonderful things to enjoy in Barbados, there was no way we could have experienced it all in only four days and on such an impromptu trip. So we chose to relax, sample the local fares with a taste of rum punch of the island’s unspoiled coast and to celebrate Gary’s 60th birthday.

Gary and I both have hectic work schedules, so any opportunity to escape and relax is always appreciated. Our trips are often low key and intimate in secluded environments that offer rejuvenation and relaxation. Since this was our first trip to Barbados, extensive research was done during the last hour before our departure. Majority of our results yielded luxe accommodations with a hefty price tag. This is peak travel season in the Caribbean, especially for Europeans. Luckily we found a website that features luxury boutique hotels throughout the world where they featured two of Barbados low key accommodations, The Atlantis and The Little Good Harbour. We chose the Little Good Harbour because the pictures looked more inviting.

We disembarked at the Grantley Adams International Airport after a 3 hours flight from Miami, Florida, where we were greeted by our driver Victor who drove us about 55 minutes to the Little Good Harbour hotel. The Little Good Harbour hotel is a small family oriented hotel transformed into a chic boutique accommodations outside Six Men’s, a small fishing village. Victor served as our taxi driver and tour guide for the ride. He pointed out several historic points along the way including The Sandy Lane Golf Club and grounds where Tiger Woods got married.

We arrived at Fort Rupert, a three bedroom cottage an ocean view property which is detached from the main compound of The Little Good Harbour hotel. Along the coastline, you get a Hampton’s feel of a cool, casual and laid-back atmosphere, and a blend of classical colonial West Indian architecture. We had originally booked for a one bedroom accommodation but was upgraded to the best deal in the house, this 3 bedroom cottage that is adjoined to the hotel’s restaurant, which sits on the ocean’s edge.

The Little Good Harbour gives the impression of an old building on the exterior with contemporary design and amenities on the interior while still maintaining a local and Caribbean style. The cottage was outfitted with all the amenities of home which included a laundry room equipped with a washer, dryer and washing agents; full kitchen with stove and oven, dishwasher, utensils; a library stocked with both fiction and non fiction reading materials, a bar, an open dining and living room area, 3 bedrooms with full bathrooms in each; two car parking garage; a backyard with all weather outdoor furnishings and a private beach. Because of its location, miles away from several tourist activities, transportation is highly recommended.

We were greeted and welcomed by the hotel manager Trevor Parris with rum punch cocktail made from the local Mount Gay rum. There were several things we took note of that were very special qualities of a good host and the managers and owners at The Little Good Harbour, excelled. The managers make it a duty to greet  and welcome every guests to the property and on your first night to the hotel, dinner reservations are made at the hotels, popular restaurant to guests and locals, The Fish Pot.

After settling in, we took a tour of the hotel property which has 11 cottages of 1 to 3 bedrooms, two fresh water pools, a popular restaurant, gym and The Little spa which is operated by one person, so reservations have to be made in advance. There is a stretch of beach outside our cottage about 25 yards and is open to all hotel guests. The hotel is located on the North West coast on the side of the Caribbean sea, and swimming is recommended within the breakwater in front of the restaurant and the gazebo areas, as there is a reef both to the North and South of the property. And huge boulders are placed to break the waves close to shore.

Barbados has a lot to offer in terms of gastronomic delights and is dotted with superb eateries. And because we did not rent a car we were limited as to where we could visit. It also forced us to step back a bit and truly enjoy each other and our environment. We were also located on the Northern side which is devoid of a nightlife. So over our four days we sampled its culinary offerings. We grazed on Barbados national dish, flying fish, dolphins, and enjoyed daily sips of their addictive rum punch made from the islands Mount Gay Rum.

The Fish Pot, headed by Tracey Yearwood and staff serves up a delectable menu of local and international cuisine in a minimalist decor. For our three nights stay, dinner was served from the restaurant. We also learned on the first night that reservation was a necessity and it was a difficult place to get a dinner ticket, even as a guest at the hotel. Reservations are recommended in advance. On night one we were lucky to get a table as dinner reservations were made well in advance by the hotel manager for us. We dined on duck, scallops and dolphins and soothe our sweet tooth with a delicious blend of banana parfait. Lamb shank, snapper and chicken on the following nights with a second serving of banana parfait, and an orgasmic pistachio white chocolate mouse. Their sweet potato mash was a hit as well.

Because of the popularity of the restaurant amongst locals and tourists, dinner reservations have to be made in advance. Unfortunately on the second night we were unable to dine there as the restaurant was full for the rest of our stay. We were a bit disappointed but very thankful when the waiter suggested we ordered room service. With that bit of information we became creative and discovered that we had the best view and table in the house. All our cottage windows have direct view out to sea and we are literally on the ocean’s edge, so we prepared a table with the cottage white sheet, two chairs and decorative pieces from the cottage and place them in front of the living room window. We created a private dining area with the best view, an ambiance complete with seda france scented travel candles. At the end of it all, it was all about the experience, we had the view, good food and good company. And it was intimate, personal and well worth it. There we had breakfast and dinner for the remaining time on the island with room service from Fish Pot. Breakfast was a fishy affair with a heart stopper of grilled flying fish with sauteed onions on tomatoes with a black olive ciabatta and scrambled eggs, grilled tomatoes, breaky potatoes, mushrooms, pork sausage, bacon, baked beans and toasts.

Each morning we were awaken to the magnificent roar of the ocean as the thunderous waves of the Caribbean sea splashed against the boulders breaking the waves outside our bedroom window. Another welcoming treat was the sweet chirping of a tiny island bird that blessed us with her presence every morning on the window’s ledge. And around 6am I would curl up at the window to watch the laborers of the sea, fishermen, journey out to catch their daily bread-dolphins-snapper-flying fish, maybe? This kind of tranquility breathes happiness, soothe my senses and transported me into a moment of bliss. The beauty of Barbados is simply breathtaking, an authentic Caribbean splendor.

Although we did not tour the island, we were very well settled and relaxed on this unspoiled coast. On our random exploration/adventure we visited the Animal Flower Cave named after the sea anemones in the rock pools which is said to be a wonder of Barbados, not to be missed. The cave is located to the most Northerly tip of the island with spectacular views and scenery of waves pounding the surf causing enormous wave showers of up to 50 feet high against some dramatic rock formation. The tour section of our trip was canceled due to high tides. The tour includes a visit to a secret cave to view the naturally formed window out to sea and the cave flowers.

We were also disappointed because our plans to visit St. Nicholas Abbey were thwarted as well. Our tour was scheduled on a Saturday, and they are no longer open their doors on Saturdays. Built in 1660, The Abbey is one of the oldest buildings/structures on the island that has been restored and houses a rum distillery.

We must have one last taste of Barbados before we depart, and The Lone Star restaurant hits the spot serving up a delicious dish of Caribbean fish pie with a variety of white fish like barracuda etc., and the right portion of rum sour made from the island’s Mount Gay Rum.