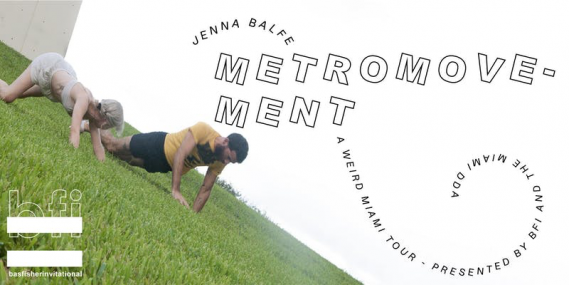 Jenna Balfe’s WEIRD MIAMI Metro Tour will give attendees a look behind the scenes into her practice, as she’ll discuss how Miami specifically informs her work while navigating sites downtown via the Metromover. In true Jenna fashion, she’ll incorporate moments of nature, empathy, performance, surprise, and audience engagement throughout the tour as she previews Transnaturism, her upcoming solo project with BFI.

BFI offers an alternative look at the city and its artistic offerings with it’s popular, artist-led WEIRD MIAMI tours, which introduce locals and tourists to lesser-known places and cultural projects. BFI invites artists to create tours and exhibitions that reflect their relationship with the city. Through WEIRD MIAMI, BFI exposes the deep and varied year-round cultural depth of Miami by having artists become the hosts of tours around the city, bringing the artist talk out into the field for an engaging social experience.

Metromovement, presented by BFI and the Miami DDA is part of the scheduled programming for ArtsLaunch 2019 at the Adrienne Arsht Centerfor the Performing Arts. The tour will begin in the lobby of the John S. and James L. Knight Concert Hall, before we depart as a group and hop on the Metromover!

Tickets are 10 dollars. If you are a resident of Downtown Miami, email thebasfisher@gmail.com with one form of proof of residence and we’ll send you a discount code for 5 dollars off, compliments of the Miami DDA! If the cost of a ticket prohibits you from attending, email BFI to discuss sliding scale pricing options.

In the event of severe weather, this event will be rescheduled for September 22nd.