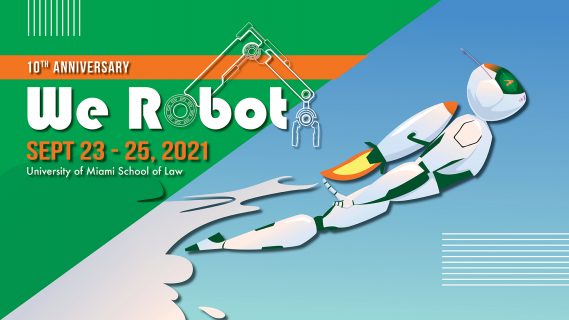 Machine learning, artificial intelligence, and robotic systems are changing our society, our laws, and our social constructs at breakneck speed. We Robot, the annual, interdisciplinary virtual conference on the emerging legal and policy questions relating to robots and the AIs that often control them, returns to the University of Miami School of Law, the founding institution, September 23-25, 2021.

The conference unites those on the front lines of robot design, development, and deployment with legal policymakers and influencers, and even philosophers, in the legal and social structures in the robotic sphere.

Conference topics keep a finger on the pulse of robot law

Marking the 10th anniversary of the conference, We Robot 2021 will present scholarly papers, technological demonstrations, and poster session presentations by North American and international academics, practitioners, and others from diverse fields. The unique conference fosters interdisciplinary collaborations between developers of robotics, artificial intelligence, and related technology and experts in the humanities, social science, and law and policy.

Sample themes and topics of this year’s three-day virtual program include:

“Somebody That I Used to Know: The Risks of Personalizing Robots for Dementia Care”

“Artificial Intelligence: The Challenges For Criminal Law In Facing The Passage From Technological Automation To Artificial Autonomy”

Robots and the environment

“Robots in the Ocean”

“On the Practicalities of Robots in Public Spaces”

Seminal conference and its goals, more relevant than ever

The conference builds on a growing body of scholarship, much of it shaped by earlier editions, which explores how the increasing sophistication and autonomous decision-making capabilities of robots and their widespread deployment disrupt existing legal regimes or require rethinking policy issues.

“Robots are moving out of the warehouse and into our lives,” said A. Michael Froomkin, the Laurie Silvers and Mitchell Rubenstein Distinguished Professor of Law and a co-founder of the conference. “We are just seeing the start of a boom in everything from delivery robots to medical robots, to autonomous military drones deployed in combat.”

With AI and robotics growing so fast and little time to consider their legal, ethical, and moral uses, attendees consider the issues raised by robots and their benefits in the home, hospitals, business, public spaces, military settings, and beyond.

Froomkin echoes the conference’s relevance, “Everywhere a robot goes, it creates legal and policy issues that need to be worked out to make the world safe for both robots and especially people.”

The conference will be held virtually from 8 a.m. to 5 p.m. Registration is open. For more information, visit https://werobot2021.com/.