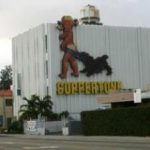 Covers 160 years of recorded history of North East Miami starting with the 1857 Military Trail that became Biscayne Boulevard in the 1920’s and served as the spine for the development of the area. Focuses on the boom time Belle Meade and Aqua Marine subdivisions and the architecture of the Mediterranean Revival, Art Deco and MiMo periods. Also includes the history of Coppertone, Benjamin Green, its forgotten inventor, and the historical Coppertone Girl Sign.

Tours begin at 10:30AM from the Vagabond Motel, 7301 Biscayne Boulevard, across from the Coppertone Girl Sign. They last approximately 1 hour and 15 minutes and cover about a mile on foot.

A $10.00 donation for the Biscayne MiMo Association is requested. No credit cards

This tour is offered in conjunction with the Taste of MiMo promotion by local restaurants on the six following Saturday Mornings: