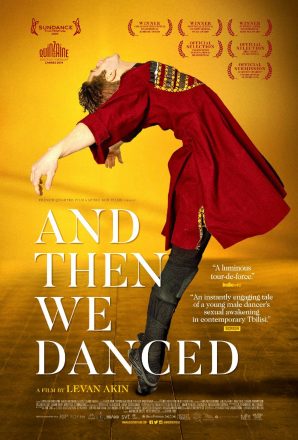 Starts today- Fri, April 10th
For a limited virtual engagement
A gifted dancer named Merab moves beautifully, but his mannerisms enrage his coach, who finds them too effeminate. Merab, however, quietly defies not only his coach but his community’s hyperconservative constraints. An aura of danger emerges when he meets a handsome new dancer named Irakli, whose gifted technique becomes a source of attraction and competition for Merab. As the two fall into a secretive affair, whispers of their newfound romance threaten their respective careers.
Far from fitting into the traditional coming-out narrative, And Then We Danced represents something especially joyful, romantic, and transgressive. It stands confidently as one of the most important films—gay or otherwise—of the year.
A passionate tale of love and liberation set amidst the conservative confines of modern Georgian society, since premiering at the 2019 Cannes Film Festival and the Sundance Film Festival, Levan Akin’s groundbreaking drama continues to garner attention and acclaim from audiences and critics alike. It is unmissable.
WATCH NOW