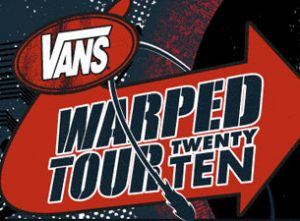 It’s not summer until the Vans Warped Tour®–North America’s longest-running touring festival–begins, and 2010 promises to be the most memorable jaunt yet for the annual punk rock extravaganza. Now in its 16th year, the 43-date tour commences June 25 in Carson, CA and finishes August 15 in Hillsboro, OR (see full list of tour dates, cities and venues below).  The tour’s kick-off party is confirmed for Friday, April 9 at the Key Club in West Hollywood with performances from a diverse array of Vans Warped Tour 2010 artists including: Andrew W.K., The Reverend Peyton’s Big Damn Band, The Pretty Reckless, Pierce the Veil and Death Punch.

“Anyone who thought that after the 15th Anniversary we would let up, was mistaken,” says tour founder Kevin Lyman.

The VANS WARPED TOUR rolls into West Palm’s Cruzan Amphitheatre on Saturday, July 24th at 12 noon.  General Admission tickets are $31.93 in advance and $40.00 day of show.  Tickets are available through the PNC Bank box office at the Amphitheatre, www.livenation.com or charge-by-phone: 800-745-3000.  A special discount ticket is available for $21.54, only through Music Today.

The 2010 incarnation of the VANS Warped Tour–affectionately known as “punk rock summer camp”–will host a distinct and diverse lineup of the hottest artists on the scene, as well as a full concourse of lifestyle attractions and vendors. Even better, it all comes at a traditionally affordable ticket price. More interactive and fan-friendly than ever, check out the newly re-vamped WWW.WARPEDTOUR.COM. Visit the site for a full list of bands performing at each show and more.

Festival organizers made this traveling punk rock circus the summer’s best bang for your buck. Appealing to everyone from traditional punk fans to backpacking hip hop kids to metal heads, VANS Warped Tour has its finger on the pulse of the most fiery acts in absolutely each and every genre–from more traditional punk acts Dropkick Murphys, Pennywise and Alkaline Trio, to the straight up rock of Street Sweeper Social Club, the blistering metal of Dillinger Escape Plan and the party rock of Andrew W.K.. Check out the current lineup below.  List is subject to change and not all bands will perform at every day (check WWW.WARPEDTOUR.COM for band listings by city).

The following is a list of all the bands on the 2010 VANS WARPED TOUR:

Bring Me The Horizon

Dustin Jones and The Rising Tide

Every Time I Die

In Fear and Faith

Of Mice and Men

This Time Next Year!

Walk Off The Earth

We Are The In Crowd

You Me At Six

Plus, keeping our environment in mind, the WARPED ECO INITIATIVES (WEI) will continue to be a big part of the tour in 2010. Facets of WEI range from biodiesel fuel for touring trucks and buses to environmentally friendly catering for bands and crew courtesy of Tada Catering. There’s even a solar-powered sound system on the Kevin Says Stage.  Furthering WEI’s online presence, the WARPED website (WWW.WARPEDTOUR.COM) showcases pages for each tour date, including public transportation options and carpool message boards as well as eco contests and initiatives.

In addition, the VANS WARPED TOUR has partnered with the TJ Martell Foundation once more. For each tour date, the TJ Martell Foundation will auction a pair of tickets and the opportunity for fans to watch their favorite band from the side of the stage. Plus, the third annual Vans Warped Tour/TJ Martell bowling event has been scheduled for Monday, June 28 in Phoenix, AZ. Bands will square off in a rock n’ roll bowling competition of epic proportions. Working in conjunction with 103.9 (The X), WARPED will auction off a spot on every band bowling team, allowing lucky fans to roll alongside their favorite rockers.

It will no doubt be another year to remember for this summer tradition. See what the press has said about past installments of the tour:

“Best Tour/Festival Of The Year”

“Trends pass. Rock festivals come and go. But the Warped Tour marches on.  Warped hasn’t just survived–it continues to thrive: Fourteen years after quietly premiering as a celebration of the teenage skate-surf-punk culture, one decade after expanding to a massive multi-stage event, the traveling music party remains one of the summer’s perennial draws…”

“…as much a coming-of-age experience as a concert event. The bonding between the bands and their mostly young fans is very real, with autograph sessions and mingling being as common as the catchy riffs pinging around the pavilion.”