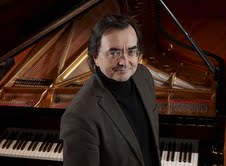 Pianist Pierre-Laurent Aimard will present a FREE piano master class in Clarke Recital Hall at the University of Miami Frost School of Music, Thursday January 27, 2011 from 2 p.m. to 4 p.m., in conjunction with his recent tour with The Cleveland Orchestra.

Widely acclaimed as a key figure in the music of our time and as a leading interpreter of the standard piano repertoire, Pierre-Laurent Aimard enjoys an internationally celebrated career which transcends traditional boundaries.

Born in Lyon, France in 1957, Pierre-Laurent Aimard studied at the Paris Conservatoire with Yvonne Loriod, and in London with Maria Curcio. Early career landmarks included winning first prize in the 1973 Messiaen Competition, and being appointed at the age of 19 by Pierre Boulez to become the Ensemble InterContemporain’s first solo pianist. For more than 15 years Aimard collaborated closely with György Ligeti, recording his complete works.

In recent years Pierre-Laurent Aimard has been honoured with ECHO Classic Awards, both in 2003 for his recording of the complete Beethoven Piano Concertos with the Chamber Orchestra of Europe led by Nikolaus Harnoncourt; and in 2004 for his Debussy Images and Etudes. Aimard’s recording of Ives’s Concord Sonata and Songs with Susan Graham was a Grammy Award winner in 2005. Additional releases in recent years include recital discs of Ravel, Carter and Schumann; while Mozart Piano Concertos with the Chamber Orchestra of Europe, directed from the keyboard by Aimard, have been hailed as “one of the most exquisite Mozart recordings of all time” (Wolfram Goertz, Die Zeit, 13 October, 2005.).