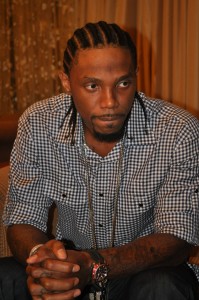 Faced with the responsibility of bringing the NBA trophy to Miami, the death of his mother, and his own personal battles, Udonis Haslem found time for the children.

“It’s all about the kids,” Udonis told Premier Guide Miami. “It brings me joy just to see the smile I put on the kids faces.”

Udonis hosted a Vegas-themed fundraiser, at the Fairmont Turnberry Isle in support of his foundation, the Udonis Haslem Children’s Foundation, a non-profit organization designed to help at-risk youth reach their full potential both in the classroom and as individuals.

The event began with a short video in remembrance of his mom, Debra Haslem and her contribution to the foundation.

Udonis was also supported by his teammates Mike Miller, Dwayne Wade and Chris Bosh. The event was emceed by Miami Heat’s own DJ Irie.

Udonis who seemed very casual and humble in appearance is determined to continue to give back to the community and support the children. He believes that through education, they will have the opportunity to make conscious decisions in their lives.