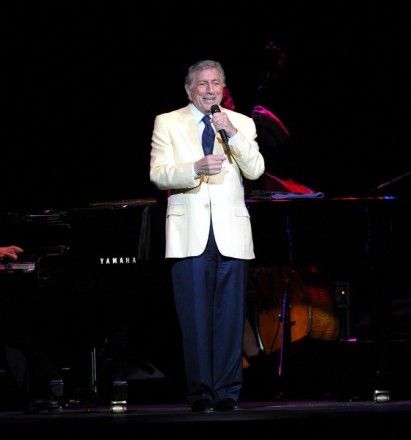 It was the year 2006 when Gary walked into an elevator at the Marriott Hotel in Midtown, Manhattan and Tony Bennett was the only other occupant (Whoopi Goldberg joined them, later). Star struck, Gary said a faint hello which was met with a “Hello, how are you, young man?” Tony was scheduled for a concert in the area then.

Now only 6 years later, Gary sat in the concert hall at the Hard Rock Live, in Hollywood, Florida with other devoted fans to listen to Mr Bennett reminisce on old times through classical and timeless Jazz ensemble and occasional commentaries.

Flexibility is key in surviving in today’s music industry. Inspired by music Greats like Cole Porter, Bing Crosby, Judy Garland, and Louis Armstrong, Bennetts music seems to pay homage to that era. He has remained constant over the years with his formal appearance, always in a suit and tie. And tonight was no different when he appeared on stage well suited complete in a white jacket. His music style remains the same. He refuses to compromise, to follow trends or change his music to a contemporary format. What he has done, instead, to remain relevant, he has reached out to the younger generation to help them understand and appreciate his kind of music.

Tony also credits creativity for his continued success by collaborating with younger and contemporary artists like the late Amy Winehouse and Christina Aguilera. Which seemed to have accomplished what he intended as his number with Amy was well received and charmed the younger generation.

Backed by a four man band, he performed a set of hits without his daughter Antonia who occasionally accompanies him on tour and as an opening act. The Best Is Yet To Come, How Do You Keep The Music Playing also done by James Ingram, Rags To Riches, Because Of You, were some of the hits he performed with the band.

Tony represents an era in our musical history where Jazz was dominant and exciting. With everything there is an up and down or high and low, jazz is no exception and has fallen behind with very few ambassadors who remain steadfast in keeping the history alive and strong, holding on to a magical era.

From jukebox popularity to pop charts to top honors, and numerous accolades including the Kennedy Center Honors, Lifetime Achievement Award and 17 Grammys, the 85 years old crooner is thankful to be alive, and appreciates how revolutionized the industry has become. Even though he insists he is not a fan of new music.

In one of his commentaries in between songs he spoke about his name change from Anthony Dominick Benedetto to Tony Bennett. Given to him by Bob Hope in the late 1940’s.

I Left My Heart in San Francisco, a 1962 hit which became his signature song was the most favored by the audience. However like most of the other songs he performed, this too was cut short. Other favorites included Broadway classics from Cabaret, Maybe This Time which placed him on the map as an international artist and Kismet, Stranger In Paradise.

Mr Bennett should have been one of the contestants on dancing with the stars; Tony has moves. The highlight of the night was watching him dance on stage as he thrills the audience with his occasional fancy footwork, and spins which proves at his age, he still has it.

Like Fred Astaire, Tony intends to perform until he is no longer able to do so, until death, that is. He said he has no plans of retiring, so one should get used to seeing him perform at concerts, galas and other social engagements.

Stories are a part of a performers routine and this one was no different as Tony Bennett took us down memory lane with snippets of his 60 years in the music industry.

In a revolutionized music world where pop and rock have dominated and jazz and blues have taken a backseat, Tony Bennett has managed to stay consistent and true to his beliefs and craft and is a true legend.

If only he were 20 years younger and sings the songs full length, this would have been an amazing concert. However, any opportunity to see the legend perform and share his passion is always respected and appreciated. Given the longevity and the dedication Tony has to music, he gave us the best he could.