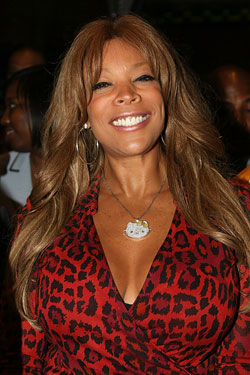 MONDAY, MAY 17
* Tune-in as Wendy shares her exclusive interview with the legendary Dolly Parton from her trip to Foxwoods for ‘Kenny Rogers: The First 50 Years’ celebration.

* ‘One Tree Hill’ hottie Robert Buckley stops by to chat about the long running CW series.

* Our special opening announcer, Royce Reed discusses VH1 reality show, ‘Basketball Wives.’
TUESDAY, MAY 18
* Tune in as Wendy shares her exclusive interview with Lionel Richie from her trip to Foxwoods for the ‘Kenny Rogers: The First 50 Years’ celebration.

* Grammy Award-winning rapper and actor Common stops by to chat about his relationship with Serena Williams and his new movie ‘Just Wright.’

WEDNESDAY, MAY 19
* Tune in as Wendy shares her exclusive interview with Kenny Rogers from her trip to Foxwoods for the “Kenny Rogers: The First 50 Years” celebration.

* Television personality and hottie Mario Lopez dishes on his new book, ‘EXTRA LEAN: The Fat-Burning Plan that Changes the Way You Eat for Life’ and becoming a father.

* Former ‘Sister, Sister’ stars Tia and Tamera Mowry dish on their upcoming reality show as well as the new season of Tia’s BET show ‘The Game’ and their Lifetime movie, ‘Double Wedding.’

* Actor Blair Underwood joins Wendy in-studio to chat about his latest novel ‘From Cape Town With Love’ and his new NBC pilot, ‘The Event.’

* Tune-in for a fashion show, showcasing bathing suits for women 30 and over.

* NY Times best-selling author Candace Bushnell stops by to dish on the ‘Sex And The City’ phenomenon as well as her latest project, ‘The Carrie Diaries.’

MONDAY, MAY 24
* Funnyman Jamie Kennedy stops by to chat about his new movie ‘Finding Bliss.’

* ‘The Doctors’ star Dr. Travis Stork stops by to dish about his new book ‘The Doctor Is In’ and the hit CBS show as well as answer audience questions.

TUESDAY, MAY 25
*International singing sensation and Grammy Award-winning singer, Celine Dion chats about her latest DVD, ‘Celine: Through The Eyes Of The World.’

* Bill Klein and Jenn Arnold, stars of TLC’s ‘The Little Couple’ stop by to dish on the reality series.

* Tune- in to watch multi-platinum selling group, Backstreet Boys perform the song ‘Bigger’ from their latest album ‘This Is Us.’

* Our special opening announcer and Olympic volleyball champ Gabrielle Reece stops by to chat about her return to professional volleyball and her guest appearance on NBC’s ‘The Biggest Loser.

* Rapper and actor, Ice Cube stops by to dish on his new TBS show, ‘Are We There Yet.’

* Grammy-Award winning rapper T.I. stops by to chat about his latest album, ‘King Uncaged’ and his recent release from prison.