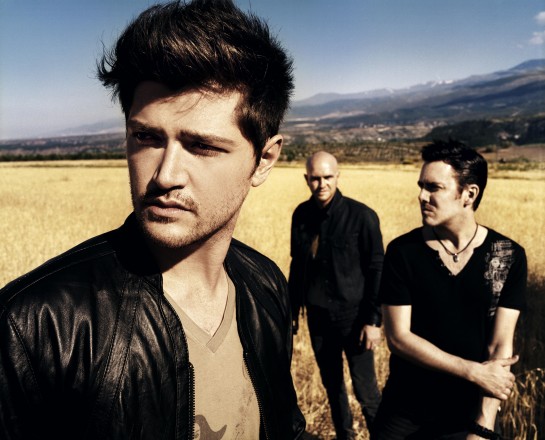 Hot off the heels of a notable No. 3 debut for their recent studio album, Science & Faith, and currently touring the U.S. on a string of sold out dates – The Script clearly have no plans to slow down. This fall, the Irish rockers will return stateside for a 31-city headlining tour, kicking things off August 30th in Minneapolis, Minnesota.
The Script comes to the intimate Fillmore Miami Beach at the Jackie Gleason Theatre on Friday, October 7th at 8PM.  General Admission tickets are $33.50 in advance and $35.00 day of show.  They go on sale Friday, June 10th beginning at 10AM local time immediately following the band’s performance on NBC’s Today Show Summer Concert Series at LiveNation.com or charge by phone 800-745-3000 and at the Fillmore Box Office during normal business hours (Mon. – Fri., 11AM – 6PM and during show days). All dates, acts and ticket prices are subject to change without notice. All tickets are subject to applicable taxes, parking and service and handling charges.
“For The First Time,” the hit single off Science & Faith is currently Top 10 at Pop Radio and holding the #2 spot at Hot AC, while the video for the single – which debuted at #1 on VH1 around release – is currently in heavy rotation at MTV. The band recently appeared on VH1’s Big Morning Buzz Live show, and participated in VH1’s Best Cruise Ever at the end of April.
The album, which was also released overseas, immediately garnered interest from critics and debuted at #1 in Ireland and the UK. Written and produced by The Script frontman Danny O’Donoghue and guitarist Mark Sheehan Science & Faith was recorded in both London and Los Angeles and is once again a testament to what The Script do best; pen emotion-packed songs that contain fluid melodies, haunting hooks and Danny’s soulful vocals riding high over huge, anthemic choruses.
Critics on U.S. soil have followed suit. USA TODAY awarded Science & Faith a stellar review, The New York Times bestowed the album a “critic’s choice review,” while Entertainment Weekly described “the band’s sunny lyrics, tuneful riffs, and build-build explode! – choruses nail a VH1 catnip niche.”
The Script have appeared on NBC’s Today Show, The Late Show with David Letterman, Live! With Regis & Kelly, Ellen DeGeneres, Jimmy Kimmel LIVE, and most recently on The Tonight Show with Jay Leno and Lopez Tonight.
The Script is Danny O’Donoghue (vocals/keys), Mark Sheehan (guitar) and Glen Power (drums).
For more information on The Script please visit: www.thescriptmusic.com

The Following Tour Dates Are Confirmed:

Note: Tickets from the original show dates will be valid for the rescheduled dates listed below