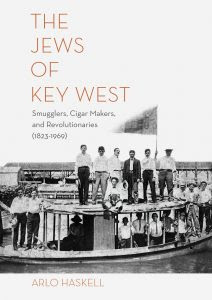 Sunday, September 22, 2019 3:00pm
Author Arlo Haskell presents his book which details the dramatic story of South Florida’s oldest Jewish community and a major addition to the history of this unique island city.
Long before Miami was on the map, Key West had Florida’s largest economy and an influential Jewish community. Jews who settled here as peddlers in the nineteenth century joined a bilingual and progressive city that became the launching pad for the revolution that toppled the Spanish Empire in Cuba. Many Jews left Key West during the 1930s and their stories were ignored or forgotten by the mythmakers that reinvented Key West as a tourist mecca.
Free with Museum Admission
Jewish Museum of Florida-FIU | 301 Washington Avenue, Miami Beach, FL 33139