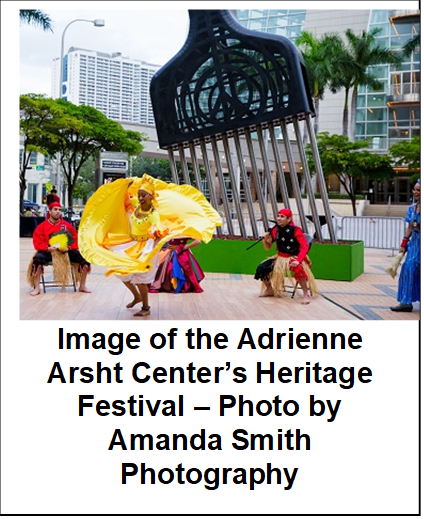 The Adrienne Arsht Center for the Performing Arts of Miami-Dade County (@arshtcenter) proudly announces the launch of a new six-part monthly panel series, THE HERITAGE PROJECT: AN ONLINE ARTISTIC SALON SERIES. Each month, local community leaders and cultural experts from across South Florida will gather virtually to discuss the history of social justice, activism, and influence of Black art on mainstream American culture. The free series kicks off on September 30, 2020 with “SONGS OF FREEDOM,” an exploration of the role of music in the movement for social justice. THE HERITAGE PROJECT will run monthly through February 2021, culminating with the second annual HERITAGE FESTIVAL on the Arsht Center’s Thomson Plaza for the Arts.

“The Arsht Center has made a commitment to lift up Black voices through the work on our traditional and virtual stages and in our community,” said Arsht Center President and CEO Johann Zietsman. “The Arsht Center’s Heritage Project is a vehicle by which Miami’s diverse community can explore, discuss, listen to, and learn from Black voices during this important time in our nation’s history.”

The format of the panel series is reminiscent of the “salons” held during the Harlem Renaissance between Black leaders, intellectuals, activists, artists, educators and business owners. The goal of THE HERITAGE PROJECT: AN ONLINE SALON SERIES is to bring the salons into the 21st century by curating groups of like-minded experts to discuss a variety of topics affecting Black artists. Each salon will last 75 minutes, with 60 minutes dedicated to an in-depth live discussion about that salon’s topic. The final 15 minutes will be reserved for Q&A with the audience.

The first two sessions of THE HERITAGE PROJECT: AN ONLINE SALON SERIES are as follows:

Join us as we explore how music has been an influence in the social justice movement. The panelists will break down songs that are considered songs of freedom and have been part of the coded language in the struggle for freedom.

The discussion will include Brenda Alford, acclaimed jazz composer and vocalist, Valerie Coleman, professional flautist, composer and founder of the Grammy nominated Imani Winds, and Dr. Wayne Bumpers, Associate Professor of Keyboard Arts at Miami-Dade College with Johann Zietsman, President and CEO of the Arsht Center, as the moderator.

What are some of the African influences on Latin music and cultures? As a conclusion to Hispanic Heritage Month, hear the unique perspectives of Afro-Latinx musicians who will share their experiences as Black members of the music industry.

Panelists will be announced soon.

Additional programming and participants in upcoming events in THE HERITAGE PROJECT: AN ONLINE SALON SERIES will be announced at a later date.