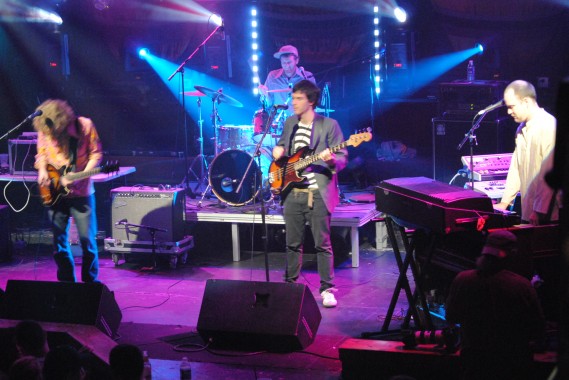 The Heavy Pets will be throwing a hometown End of the World party on Friday, December 21st at the Culture Room along with their friends Greenhouse Lounge. If we’ve only got one more night, why not throw the funk down! Earlier this month, The Heavy Pets released the Everywhere Sessions: Volume 1 EP for free download. Recorded at the AURA Music Events studio in Boca Raton, the three-song EP features “Chew,” “Help Me Help You” and “The Day the Sun Forgot to Rise.” It is available for free download at http://bit.ly/THP_ES_Vol1.

THE HEAVY PETS: The Heavy Pets (THP) are an American rock band whose contagious vibe blends rhythm and blues, jazz-funk, nu-disco and reggae fusion with rock and roll. Called “a living, breathing, force of nature” by Relix, THP are known for powerhouse live performances and infectious dance songs framing catchy smart lyrics. The group became an instant Sirius radio sensation in 2007 with the release of their double-disc debut album, Whale, driven by hit tracks “Operation of Flight” and “Sleep.” First embraced by the jam scene for their raw talent, their cross-over sound that is showcased on their self-titled album and was dubbed a “Top 10 Album of 2010” by The Huffington Post, propelled them into the periphery of mainstream music. Returning to their acoustic roots on Swim Out Past the Sun (2011), THP’s guitar duo set aside their electric axes for a more organic approach. Featuring a three song sit-in by longtime Jerry Garcia collaborator David Grisman, the album presents a fresh perspective from the ever-evolving quintet. Major festival darlings, THP have taken the stage at JamCruise, Bonnaroo, High Sierra, Gathering of the Vibes, moe.down, Summercamp, All Good, Wakarusa, Bear Creek, Mountain Jam and their namesake PetZoo.