THE HEAD & THE LOAD

with music composed and conceived by Philip Miller 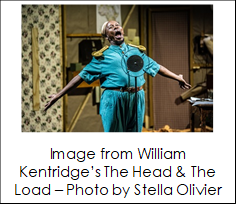 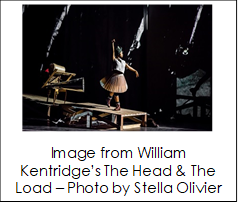 Presented by the Arsht Center (@arshtcenter) for three days only during Miami Art Week 2022, William Kentridge’s THE HEAD & THE LOAD invites audiences directly onto the Lynn Wolfson stage of the Ziff Ballet Opera House to be immersed in a powerful story about African people’s role in World War I. With the wings and backstage of the Ziff Ballet Opera House reconfigured to become a unique, site-specific performance space large enough to accommodate this monumental work, the audience will take its place directly on stage for a once-in-a-lifetime theatrical experience.

Created by Kentridge, one of the most renowned contemporary artists in the world, THE HEAD & THE LOAD has been described as “electrifying” (The Independent) and a “fiercely beautiful historical pageant” (New York Times). Exclusively for this performance, the Arsht Center has created the largest custom-built stage in Arsht Center history (180 feet wide). THE HEAD AND THE LOAD will be performed in Miami only for four limited-capacity shows from December 1-3. Tickets range from $50-$175 and can be purchased online at arshtcenter.org or by calling the Arsht Center Box Office at (305) 949-6722.

Taking its title from a Ghanaian proverb, ‘the head and the load are the troubles of the neck,’ this epic theatrical-music piece tells the neglected story of the millions of African porters and carriers who served British, French and German forces during the first World War. This has been called Kentridge’s most ambitious project to date, and draws on every aspect of his practice to combine music, dance, film projections, mechanized sculptures and shadow play in a visionary theatrical alchemy.

William Kentridge is an internationally acclaimed South African artist, renowned for the evocative power of his work, which has thrilled audiences around the globe. His exhibitions and large-scale, staged performances delve into the history of colonialism in Africa and the aspirations and failures of revolutionary politics, while engaging a wide range of visual and aural references – from European high modernism to African traditional and contemporary music and dance. Operating on a grand scale, his work has been shown and collected by museums all over the world.

THE HEAD & THE LOAD is an exceptionally ambitious work of performance that can only be produced and presented in vast venues that can also skillfully execute multi-faceted and highly technical productions. The work premiered at the Tate Modern in London, where it formed part of the British commemorations of World War I, and was then presented in New York for a two-week run at the Park Avenue Armory. THE HEAD & THE LOAD arrives in Miami’s Arsht Center for a limited run during Art Week.

THE HEAD & THE LOAD sees Kentridge work with his longtime collaborator Philip Miller, one of South Africa’s leading composers, and choreographer and principal dancer Gregory Maqoma to create what the artist describes as “an interrupted musical procession.” This rich and multi-layered performance features an international cast of singers, dancers and performers – a majority directly from South Africa. Miller’s score is performed by musicians from the ever-adventurous New York-based chamber orchestra, The Knights, who are joined by musicians from Italy, South Africa and Guinea. Miller’s powerful and evocative compositions offer a perfect complement to Kentridge’s imaginative work. Please visit here for more information about the creative team behind THE HEAD & THE LOAD.

THE HEAD & THE LOAD is funded with leadership support from The Roy Cockrum Foundation with additional support from Valerie Dillon and Dan Lewis.

Kentridge’s work has been seen in museums and galleries around the world since the 1990s, including Documenta in Kassel, the Museum of Modern Art in New York, the Albertina Museum in Vienna, Musée du Louvre in Paris, Whitechapel Gallery in London, Louisiana Museum in Copenhagen and the Reina Sofia Museum in Madrid.

Opera productions include Mozart’s The Magic Flute, Shostakovich’s The Nose and Alban Berg’s Lulu, and have been seen at opera houses including the Metropolitan Opera in New York, La Scala in Milan, English National Opera in London, Opera de Lyon, Amsterdam opera and others. Summer 2017 saw the premiere of Kentridge’s production of Berg’s Wozzeck for the Salzburg Festival.

The 5-channel video and sound installation The Refusal of Time was made for Documenta (13) in 2012. Since then, it has been seen in cities around the world. More Sweetly Play the Dance, an 8-channel video projection shown first seen in Amsterdam in April 2015, and Notes Toward a Model Opera, a three-screen projection looking at the Chinese Cultural Revolution, made for an exhibition in Beijing in 2015. Both have been presented in many other cities since. Kentridge’s ambitious yet ephemeral public art project for Rome, Triumphs & Laments (a 500 m frieze of figure power-washed from pollution and bacterial growth on the walls of the Tiber River) opened in April 2016 with a performance of live music composed by Philip Miller and a procession of shadow figures.

Kentridge is the recipient of honorary doctorates from several universities including Yale and the University of London, and in 2012 he presented the Charles Eliot Norton Lectures at Harvard University. In 2010, he received the Kyoto Prize. In 2015 he was appointed an Honorary Academician of the Royal Academy in London. In October 2017, he received the Princesa de Asturias Award for the arts. For more information, visit: www.theheadandtheload.com.