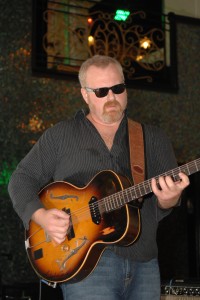 The Green Room, 100 SW Third Avenue in Ft. Lauderdale, has proudly extended its “Green Room Jazz Sessions” featuring the nationally acclaimed performer Bobby Lee Rodgers for another six months past this week’s February performance.  “Green Room Jazz Sessions II” which happens on one Thursday a month will continue to bring a fresh and vibrant sound to the South Florida entertainment scene.  Rodgers and his group will highlight the work of legendary Jazz greats like John Coltrane, Miles Davis and more.  Doors open at 7:30PM and admission is just $10.00.

“Bobby’s unique and masterful guitar talents have won over a strong following for the Sessions,” says Jeff John, owner/operator of the Green Room.  “We were delighted to keep the program going.”

Each month Rodgers will highlight a legendary Jazz great and perform two sets totally covering a variety of that artist’s work.  Following his performance on Thursday, February 24th, Bobby will present:

Bobby Lee Rodgers is a musical prodigy who upon graduation from the University of Georgia became a professor at the Berklee School of Music at the ripe old age of only 23.  He taught there for five years before returning to Atlanta where he met up with Col. Bruce Hampton (of Aquarium Rescue Unit fame) and formed the band the Codetalkers.  The band toured for eight years with Rodgers writing all the music.  Rodgers eventually went out on his own to form the Bobby Lee Rodgers Trio and has been touring and recording ever since.  Rodgers plays through a Leslie 145 and an Echoplex and a 1966 Super reverb. His baby is his Gibson 125, all original 1949 guitar.  By playing through the Leslie he is able to adapt the organ type phrasings to his guitar, giving the sound a combination of guitar and organ.

“Green Room Jazz Sessions II,” featuring the Bobby Lee Rodgers Trio begins Thursday, March 24th and continues for one Thursday per month through August 25th.  Doors are at 7:30PM with the band taking the stage for two sets at 8:30PM and 9:30PM.  Admission is $10.00.  Table seating reservations are available by calling (954)449-1030.  The Green Room is located at 100 SW Third Avenue right next door to Revolution Live in Ft. Lauderdale.

For more information go to www.greenroomlive.com.