Jedd Hughes, an Australian native, and Sarah Buxton from Lawrence, Kansas are both singers/songwriters who were destined to be together. Over the years, they have collaborated together on many projects, and have supported each others musical career. 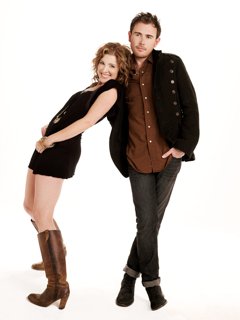 The darling duo, Buxton Hughes, finally came together after Sarah’s recording company closed. Writing songs is what they love to do, and they are now in good company.

Jedd and Sarah have worked with Keith Urban while Sarah’s associations include Martin McBride, Kenny Rogers and others.

Recently, the duo  visited West Palm Beach on the Country Throwdown Tour where they shared with Premier Guide Miami’s Daedrian McNaughton their story.

PGM: How did you get started?

Buxton Hughes: We both had starts as solo artist, but we first sang together about 4 years ago. The first time we did it was like wow-blew us both away. We thought we should do this more. The last 4 years we have sat in on each others shows playing together here and there, and finally we just decided we needed to do it together-take it on the road. We both had different record deals, and we have waited for the time to be just right. Sarah’s record label closed, and so we just started our duo-Buxton Hughes. We have a great manager, and we are having a blast.

PGM: Sarah, you have had some great collaborations. Share with us your experience with Keith.

Buxton Hughes: We are just 2 artist who have their own thing going on. Keith is a perfect example of someone who really busted the genre wide open, and is really doing his own thing-which is kind of what we are hoping to be able to do. I was out at dinner with Keith in New York, the other night….

PGM: Where was Nicole Kidman?

Buxton Hughes: She was sitting right there too. They were sitting across the table from me, and we were talking about where Jedd’s from in Australia. Keith has never heard of the place, and of course he has Jedd on speed dial-they are like buddies.

Buxton Hughes-Jedd: Even though we have been mates for years-so yeah we are old friends, and it’s the same with this tour. It’s like Little Big Town, Jamey Johnson, Jack Ingram, Eli Young Band, we are all mates. That’s the great thing abut this tour, and country music in general. Everybody is so cool.

Buxton Hughes-Jedd: Yeah, we are all close. We sing and play on each others bands/records-it’s awesome.

Buxton Hughes-Sarah: Jamey Johnson is letting everybody get up, and play during his set-just cool people. I am happy to be apart of it. I am happy I am in country music.

Buxton Hughes-Sarah: Yes I did–It was crazy. So cool to hear his voice–so cool to have him in your headphones like a rough track vocal, him singing, and then you have to think of a part to sing over Kenny. He sent me a letter in the mail saying, “Thank you for sharing your talents,” with the gold seal. Totally cool.

PGM: So what’s next for Buxton Hughes?

Buxton Hughes: We are working on a record, Buxton Hughes Record, over the summer. We are focused on writing songs for the record and finding a new label to put it on.

PGM: Give us a sense of your style on this record.

Buxton Hughes: You will hear real music. We are starting a new sad-bad revolution–no. We love rootsy country music, rock-southern rock, all of it put together–really tight harmonies–it’s just our own sounds–just real music. It’s not going to be like a chore to listen to.

PGM: How do you feel about performing on the Throwdown?

Buxton Hughes: Totally stoked. Totally honored to be a part of this tour. The Throwdown tour is the coolest thing in country music now. I think it is going to be really important for country music. Getting real artist together who have a sort of common thread, putting them out as one big show. It’s awesome that we are on the tour.

PGM: Has the crowd been very receptive to you?

Buxton Hughes: Great. Our first day was fantastic, sweet people. Country fans are the sweetest. These 2 little gals were doing the line dance-yeah-we have never seen anything like it. It’s a different type of dancing.

Check out Buxton Hughes on the Country Throwdown Tour. For more information, visit here or http://www.countrythrowdown.com/.