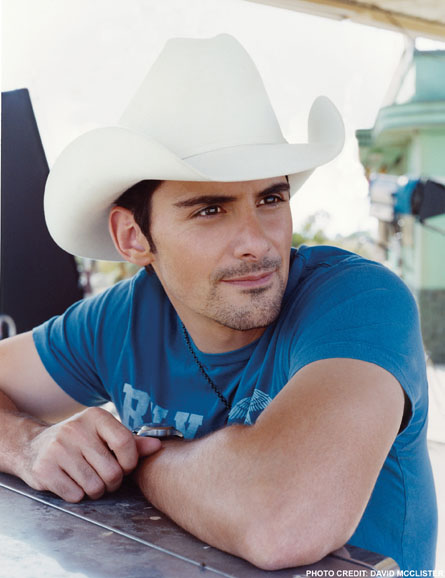 Brad Paisley announced the first leg of his highly anticipated 2010 tour, H2O World Tour presented by Chevy.  Paisley is proud to partner with Hope Through Healing Hands’ campaign for clean, safe water.  With donations made to the campaign at each tour stop HTHH will be digging wells and purifying water in America and around the world.

H2O World Tour will hit more than 75 cities in the United States, Canada and Europe over the next 12 months.  Chevy is title sponsor for the tour.  Special guests will be Darius Rucker and Justin Moore.  Appropriately, Paisley’s current single is “Water,” from his American Saturday Night album.

H2O World Tour will include a “Water World Plaza,” sponsored by Sea Ray Boats and Skinny Water, and will turn every city into a water festival.  Focal point in the Plaza area will be the “Water World Plaza Stage” featuring emerging new stars Easton Corbin, Steel Magnolia and Josh Thompson.  The tour extravaganza will open each day at 4:00pm with music starting at 5:00pm.  In addition to the music stage there will be multiple water-themed activities – including a Chevy H2O FLW fishing simulator, dunking booth, Hope Through Healing Hands’ campaign booth, and more.

Chevy will be providing a Corvette driving simulator for concert goers to test the latest Corvette ZR1 series as well as their individual driving and racing skills against Paisley himself.  “If they can beat me, they can meet me,” laughs Paisley.

“I’ve never been this excited about a tour,” continues Paisley.  “After one of the worst winters I can remember, we’re going to make-up for it this summer.”

The tour will kick off May 21-22 in Virginia Beach, VA and Washington, DC.  Live Nation is the national tour promoter.

“Brad has always considered the fans first and foremost when planning a tour, and the H2O Tour is no exception.  Brad’s vision was to have a full day of activity at each of the shows, and also provide a great value for the fan’s dollar,” says Brian O’Connell, President, Nashville Touring, for Live Nation.  “Introducing Easton Corbin, Steel Magnolia, and Josh Thompson to the tour on the “Water World Plaza Stage,” and Darius Rucker and Justin Moore sharing the Main Stage continues Brad’s commitment to bring the hottest acts in Country Music to enhance his spectacular show, and deliver value to the fans each and every night.  The H2O tour will prove to be the kick off to a great fun- filled summer!”

Country music superstar Brad Paisley is a consummate singer, songwriter, guitarist and entertainer, which has earned him three GRAMMY’s, 12 Academy of Country Music Awards and 13 Country Music Association Awards.  Paisley has released eight critically acclaimed studio albums and has accumulated sales of over 10 million units.  His most recent album, American Saturday Night, was ranked as TIME magazine’s 2009 #1 album of the year in any genre of music.  Paisley’s most recent #1 single, “American Saturday Night,” was his 16th #1 – the last 12 consecutive. Paisley’s innovative and entertaining tours have consistently placed in the Top 5 in Pollstar for attendance and his 2009 American Saturday Night tour played to nearly 1.2 million fans in 8 months.

Darius Rucker signed with Capitol Records Nashville in 2007 and has since been embraced by the country music community with his chart-topping 2008 debut, Learn to Live – an album that has produced three consecutive No. 1 singles and latest Top 5 smash, “History In The Making.” Rucker’s transition has been highly praised, with The New York Times proclaiming he has “one of the year’s most vibrant country albums.” Rucker’s success in the country music format was recently recognized at the 43rd Annual CMA Awards when he received the Top New Artist title and again with an ACM Award nomination in the Top Male Vocalist of the Year category.  Rucker is currently in the studio working on his follow-up to Live.  For more information, please visit www.dariusrucker.com.

About Justin Moore:
Lauded as Billboard’s “New Country Artist of 2009,” Moore was the only new Country artist last year to earn #1 single status (for his hometown anthem “Small Town USA”).  The success of “Small Town USA” made the Arkansas native the first solo artist to have a song from his/her debut album go to #1 since Taylor Swift’s “Our Song” (from her Big Machine Records self-titled release) in December 2007.   The hit has sold over a half million downloads to-date. Moore’s follow-up single, “Backwoods,” is currently a Top 15 hit and rising.  Moore’s self-titled album, which debuted on the Billboard Top 200’s Top 10, was recognized as one of the best albums of 2009 in The New York Times’  “The Year in the Arts” list by music critic Jon Caramanica.  For more information, visit:  www.moorejustinmusic.com or www.myspace.com/moorejustinmusic

Recognized for the current #1 hit “A Little More Country Than That”, newcomer Easton Corbin holds the title for the highest-charting male debut single for 2009 and 2010. People magazine awarded his self-titled debut album three out of four stars and claims it “sounds like the second coming of George Strait.” Others agree. Billboard boasts “Taking a page from the Strait playbook, Corbin displays excellent song sense while offering an easygoing vocal style.”; Newsday proclaims “Corbin may just be one of the year’s breakout stars.” And American Songwriter says “Easton has one of those rare, glorious voices that was made – just made – for singing country music.” Easton wrote four songs for the record, which debuted as the #2 top-selling record on iTunes’ Top Country Albums chart, as well as the #5 Top Album on the all-genre chart. Visit www.eastoncorbin.com or www.umgnashville.com to learn more about the Florida native.

CMT’s Can You Duet?  Season 2 winners Steel Magnolia (Meghan Linsey and Joshua Scott Jones) captivated America with their dynamic harmonies and musicianship that is one part Country and two parts Southern Soul.  Their win landed them a record deal with Big Machine Records – the home of Taylor Swift.  Since their win, Meghan and Joshua’s debut single, “Keep On Lovin’ You,” has skyrocketed into the Top 15 on the Billboard Country Songs Chart and landed on the Valentine’s Day Original Motion Picture Soundtrack.  Steel Magnolia are 2010 Academy of Country Music Award Nominees for Top Vocal Duo and Top New Vocal Duo.  For more information on Steel Magnolia visit: www.bigmachinerecords.com/steelmagnolia.com or www.myspace.com/steelmagnoliamusic.com

Columbia Nashville recording artist Josh Thompson burst into the country music scene this year with his debut hit, “Beer On The Table,” a down-to-earth anthem about working hard to party hard.  A native of Cedarburg, Wisconsin, Josh began pouring concrete with his father at the age of 12, giving him first hand insight about the trials of hard-working people everywhere.  His debut album, Way Out Here, was produced by Michael Knox (Jason Aldean), and features 10 songs solely written or co-written by Josh.  Way Out Here has drawn praise from countless critics, including NPR Fresh Air’s Ken Tucker and Billboard’s Wade Jessen as well as People Magazine, Country Weekly, AOL’s The Boot, CMT.com and others. For more info, check out www.joshthompsonofficial.com.

About Chevrolet:
Chevrolet is one of America’s best-known and best-selling automotive brands, and one of the fastest growing brands in the world. With fuel solutions that range from “gas-friendly to gas-free,” Chevrolet has 11 models that offer an EPA-estimated 30 miles per gallon or more on the highway, and offers two hybrid models. More than 2.5 million Chevrolets that run on E85 biofuel have been sold. Chevrolet delivers expressive design, spirited performance and strives to provide the best value in every segment in which it competes. More information can be found at www.chevrolet.com. For more information on the Volt, visit http://media.gm.com/volt or join the conversation at chevroletvoltage.com.

Founded in 1959, Sea Ray Boats is the world’s largest manufacturer of superior quality pleasure boats. Sea Ray is headquartered in Knoxville, Tenn., and operates as part of the Boat Group division of Brunswick Corporation. With more than 40 models ranging from 17 to 61 feet, Sea Ray makes a boat for every lifestyle — each built with a unique commitment to quality, craftsmanship, and excellence throughout. Additional information about Sea Ray is available at searay.com.

About Hope Through Healing Hands:

Hope Through Healing Hands is a Nashville-based 501(c) (3) that promotes improved quality of life for citizens and communities around the world using health as a currency for peace. HTHH supports health students and residents to do service and training in underserved clinics around the world. For more information, go to www.hopethroughhealinghands.org.

Log on to www.bradpaisley.com and www.livenation.com for on-sale and up to date information on H2O World Tour – dates to be added.