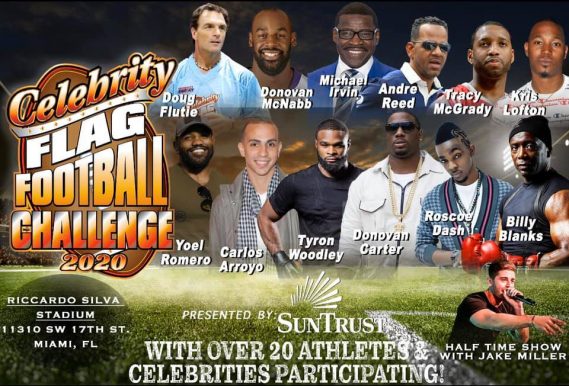 Celebrity Sweat®, the #1 celebrity lifestyle show now entering Season 6, showcasing hundreds of athletes and celebrities, is back and taking over Miami with the 20th annual Celebrity Flag Football Challenge® presented by SunTrust as part of the “SunTrust Confidence Classic.” The Celebrity Flag Football Challenge will take place (Super Bowl weekend) February 1st – noon to 3:00pm at FIU; doors open as early as 10:30am for Tailgating activation.

The Game will feature more than 25 athletes and celebrities led by NFL Quarterback Legend Doug Flutie, this year taking on NFL Alumni Favorite Donovan McNabb, with NFL Hall of Fame Captains Michael Irvin and Andre Reed. The roster will also include NBA favorites such as Hall of Famer Tracy McGrady, Miami Heat Alumni Star Carlos Arroyo, UFC Fighter Tyron Woodley and Yoel Romero, as well actors from the HBO TV show Ballers – Chris Lofton, Donovan Carter and Carl McDowell.  More than 14 other current NFL players will be added to the roster once the playoff picture is determined. *

Each year, the Celebrity Game brings the best of athletes and entertainers together to support law enforcement as well as the Military. This year more than a dozen groups will be included from DOD Channels, Homeland Security and First Responders to non-profit organizations such as Wounded Warrior Project, K9s for Warriors, Heroes Sports and others. New this year for the 20th anniversary, Celebrity Sweat and SunTrust are dedicating the entire end zone to the Military, creating the “MILITARY FAN ZONE.”

The Game will begin with early Tailgating – prizes, giveaways and activations. There will be weekly roster updates and itineraries atCelebFlagFootball.com. This year Live Nation will co-promote the Game, working with the NFL Host Committee, as well as Cox Radio, Fox Sports Florida and the Miami Herald. The Game will be a live-stream on ESPN platforms with a Hulu Live re-broadcast.

Tickets are now on-sale at CelebFlagFootball.com. Season ticket holders from the Miami Heat, as well as FIU students will all get special discounts, and everyone is encouraged to come out and enjoy “a taste of Super Bowl weekend fun”.

Save the date! Monitor the updates! Gear-up for the biggest football weekend ever coming to Miami.

*Athletes and celebrities subject to change.