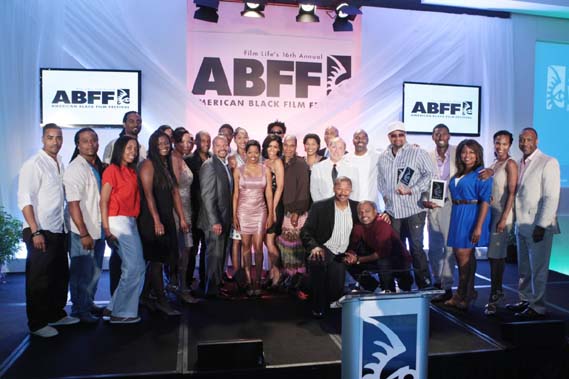 In its 16th year, the American Black Film Festival (ABFF), took place in Miami Beach, June 20th – June 23rdand was an unforgettable experience for this year’s attendees. Festival-goers shared in the revelry and experienced a collective generosity of spirit that encouraged and inspired.

The four-day festival was well-attended by talented rising actors and filmmakers who were honored for their impressive work in the films that slated the festival lineup. On hand to pay tribute to the honorees at the concluding event, “The Winners Circle,” were festival Ambassador, actor Tracee Ellis Ross, Grand Jury President, actor Mekhi Phifer, ABFF founder, Jeff Friday and his wife Nicole Friday, actor, producer, director Robert Townsend and actor, producer, director Bill Duke. Acceptance speeches from winners didn’t leave a dry eye in the audience as recipients shared their personal struggles and triumphs and illustrated how perseverance has been the backdrop to their success stories.
The festival opened with “Beasts of the Southern Wild,” one of the most talked about independent films that has been making waves at festivals across the country. Actor Tracee Ellis Ross, joined ABFF founder Jeff Friday and together they carried the torch for opening day as they left their mark throughout the festivities attending an array of events celebrating black film. Ross walked the red carpet at the opening night film, dazzled at the City of Miami’s VIP Reception, and finished off the evening at the celebratory after-party at Arkadia Lounge in the Fontainebleu Hotel.
Each day of the festival, attendees experienced unparalleled events, film screenings, red carpet premieres, panel discussions and master classes led by industry experts such as Dianne Ashford and Charles Swanson. Nielsen and Black Enterprise sponsored a dynamic panel focused on the future of black entertainment within the digital space, another discussion around current syndication practices and technology took place during the festival and was sponsored by Grab Media and HuffPost Black Voices. Filmmakers had the fortunate opportunity to listen to established writers talk about what it takes to pitch a series to television executives during a panel presented by Nickelodeon and CNN presented the documentary, “Who Counts,” followed by dialogue led by Don Lemon on the importance of the black vote in the upcoming election.
Festival-goers relaxed at the American Airlines Black Atlas travel lounge, indulged in style while being driven to various events courtesy of the Cadillac Shuttle, enjoyed refreshments and networking at the Stella Artois Mixers, Gold Peak Tea Bars and Ciroc “Red Carpet” cocktail hour. An additional festival highlight was the sponsor hospitality and diversity suites hosted by gmc Television Network, NBCUniversal and One Village Entertainment.

At the festival’s peak, Hollywood power couple, Salim Akil and Mara Brock-Akil were spotlighted for their exceptional work in the world of visual entertainment with “A Conversation with…” sponsored by American Airlines. The festivities continued with the introduction of ABFF’s first ever Webisode Challenge, hosted by funny man Chris Spencer, where winner Donnie Leapheart, was awarded with a plaque and a check for $2,500 for his outstanding work on “Osiris: The Series.”  Attendee’s also had the opportunity to view an exclusive sneak peak of Film Life TV’s first ever webseries, “The Q&A Show” starring creators Quin Walters and Addison Henderson, now airing on filmlifetv.com. Before the night ended, ABFF held an evening with filmmakers and cast of the hit film “Think Like a Man.”  Will Packer, Rob Hardy, Tim Story and Terrence J took part in the panel and in the end, ABFF Founder, Jeff Friday, awarded filmmakers Will Packer and Rob Hardy with the ABFF Hall of Fame award for their outstanding achievements in the film industry, which has undoubtedly helped rewrite the future of black cinema. The cast and creators led a shoes-off panel offering anecdotes about the film and thanking ABFF creators and supporters for being the bookend to their success story; Packer and Rob Hardy began their careers at ABFF with the premiere of their first feature film “Trois” in 2000 and have since been a pivotal part of the ABFF journey. The event was sponsored by Crown Royal.

The final day of the ABFF, was one filled with reward, recognition, and of course, “Raising Izzie.” The supercharged day began with a rewarding panel which featured some of Black Hollywood’s most noted female tastemakers who participated in a verbal walk thru of their journey navigating the film industry in “Beyond the Barriers & Biases – Black Women in Hollywood Panel.” The panel, moderated by African American Cinema Scholar Michele Prettyman Beverly and featured Twinkie Byrd, casting director and producer, Elizabeth Hunter, writer, Angi Bones, SVP of Development (BobbCat Films) and actors Malinda Williams and Tracey Heggins.
ABFF Sponsor, HBO, hosted a panel entitled “HBO Presents…” featuring some of the cable networks hottest black talent who are shining this season on series such as “Veep,” “True Blood,” and many others. Actors Sufe Bradshaw, Adina Porter, Michael K. Williams, Nelsan Ellis, JB Smoove and Essence magazine’s Cori Murray were on hand to give perspective to attendee’s on the importance of diversity in the industry and how it strengthens the HBO experience.
The evening continued with the closing night film, gmc Television Network’s “Raising Izzie.” The film, which was directed by Roger Bobb, stars Vanessa Williams and Rockmond Dunbar, and is a visual result of last year’s gmc Television Network’s Faith and Family screenplay competition. Bobb, Williams, Dunbar and the rest of the cast were in attendance.
Annually, the American Black Film Festival presents films that are diverse and provocative, from the best emerging filmmakers, and this year was no exception. The goal of the ABFF is to be a platform for independent showcases for people of African descent and to strengthen to African American filmmaking community through resources sharing, education, artistic collaboration and career development.
The complete list of ABFF Winners Circle awards are as follows:

Monica Billinger, Manager, Diversity Markets/Chicago of American Airlines made a special presentation of travel gift cards to each Grand Jury Prize Winner, which can be used towards a purchase of a future flight on American Airlines. In addition, each winner in the competition received a gift certificate from Macy’s.