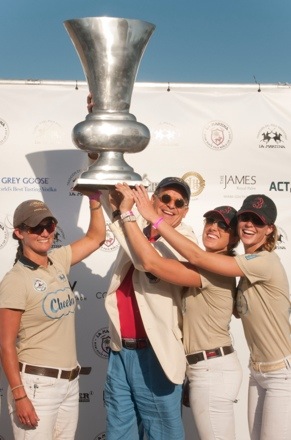 Team Cheeki, consisting of Whitney Ross, Cristina Hosmer and Tiffany Busch, fell behind The James Royal Palm Hotel/Jet Blue team, 3-1 but scored five goals in the final chukker to capture the coveted trophy. Cheeki made their way in to the finals on an opening 6-0 win over The Raleigh Hotel team, while The James Royal Palm Hotel/Jet Blue trio defeated an aggressive Grey Goose side, 13-1.

The James Royal Palm Hotel/Jet Blue team took an early lead in the two chukker final getting a pair of goals from Laura Willson and a single score from Alicia Harden. Cheeki was limited to a single penalty goal in the chukker by Tiffany Busch.

In Lower Bracket matches, the W South Beach Hotel, made up of Marina Wambold, Slaney O’Hanlon and Courtney Asdourian, scorched the team of Small Luxury Hotels of the World™ by a score of 9-0 in the finals. The W South Beach Hotel polo team earned an impressive 8-3 opening round win over La Martina to make in to the finals. SLH snuck past a talented E! Entertainment team 3-2.