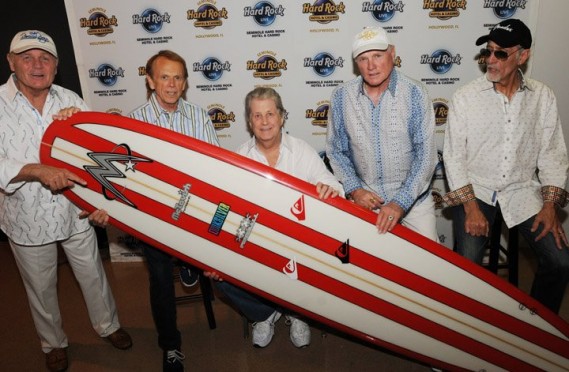 Shortly after their performance at the Grammy Awards in 2012, The Beach Boys announced that they would reunite for a grand tour with hopes to reignite a once successful career.

When you think of The Beach Boys sun surf, endless summer and fun comes to mind.

Five decades ago The Beach Boys started out as one of America’s singing heartthrobs bringing a tidal wave of hits to summer shores and to young people all over America. Now the surviving members have embarked on a reunion tour hoping to raise the heat index of summer like they did 50 years ago.

During their tour they performed at the Hard Rock Live in Hollywood, Florida and Gary had a chance to relive the 60’s and to experience the good vibrations of The Beach Boys.

With this group, it is all about fun, and although it has been well publicized that they have been having a bitter feud amongst each other for years, there was no evidence of bitterness on stage. Instead the group seemed excited to unite and preserve what is left of their legacy and as one of America’s greatest groups.

God only knows what might have become of the group if only they had stayed together over the years and continued to create fun fun, fun music for the sweltering summer months.

The surfing years of the beach boys began with brothers Brian, Carl and Dennis Wilson, their cousin Mike Love and close friend Al Jardine. Dennis Wilson died in 1983 and in 1998 Carl Wilson passed on.

The Beach Boys have admitted that the only thing that kept them going as a group was that their voices blended. And in any group their needs to be harmony and unity which this group was lacking.

The group was sweeping the nation with their California beach attitude singing love songs which captured the hearts of many around the country and later made hits like “Surfin’ USA’ and ‘Surfing Safari’ a huge success.

Despite their many wranglings in court and out, the real story for The Beach Boys is the music and with that in mind, they performed music of old summer days which reminded many audience members of those teenage years with ‘Caroline No’, ‘Wouldn’t It Be Nice,’ and ‘Good Vibrations.’

Sole original member, Love is at the handle, and now directs the group on this anniversary tour hoping to reap the benefits of the past. The tour features Wilson, Love, Jardine and Bruce Johnston and guitarist David Marks.