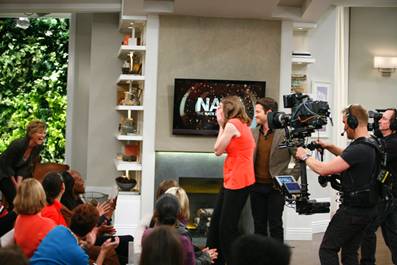 Laura Van Remortel, a Sugarland fanatic from Green Bay WI, thought she was participating in a segment about people who have found inspiration from others on the nationally-syndicated “The Nate Berkus Show.” During the segment Laura explained to Nate that she credits her favorite Sugarland song, “Something More” for helping her through her toughest times. Little did she know that Nate had “Something More” in store for her…a surprise visit by Sugarland’s own Jennifer Nettles!  Nettles, who later talked to Nate about her love of design, presented the hysterical fan with a framed music sheet to her favorite song.  The heart-warming surprise and Nettles interview will be featured on the Friday, November 19th edition of “The Nate Berkus Show” (check your local listings).