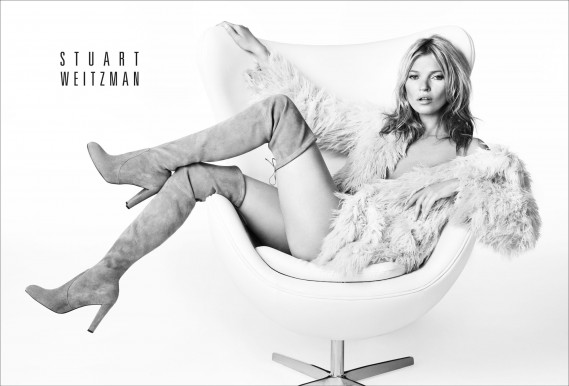 Miami, Art imitates life in Stuart Weitzman’s Fall 2013 ad campaign, as fashion icon Kate Moss serves as both the face and the muse. The styling of the dramatic black and white images, photographed by Mario Testino, aims to mirror Moss’s effortless signature look.

While Moss’s style has been inspirational and aspirational for years, her edgy aesthetic resonates now more than ever as fall runways teemed with 90s-inspired looks reminiscent of her personal style. Since Moss was an originator of this aesthetic, Stuart Weitzman decided to use her “perfectly imperfect look” as the creative inspiration for the campaign. From her trademark shaggy furs, to fitted blazers, to cut-off shorts, to hip all-black ensembles, Moss’s must-haves are perfect pairings for Weitzman’s trademark boots. The fall campaign showcases in-demand trends, including thigh-highs, lace-up combat boots and menswear-inspired Chelsea boots. Also featured is the brand’s iconic 5050 over-the-knee boot, which is celebrating its 20th anniversary this Fall season.

“I enjoyed working with Stuart Weitzman again this season to showcase his fabulous fall boots,” said Kate Moss. “Shooting the campaign with Mario is always fun and, with such a great team, it really doesn’t feel like work.” 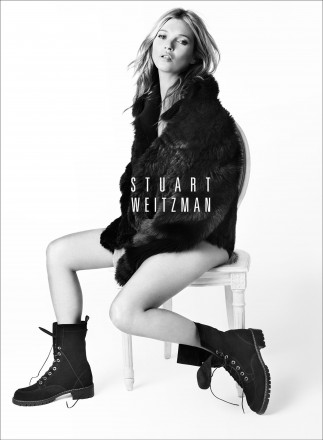 Moss, who debuted as the face of the Stuart Weitzman brand in the Spring 2013 ad campaign, was chosen because of her unparalleled status as a global style icon. Moss exudes a sense of style and confidence that every woman aspires to emulate. Women want to dress like her, look like her and walk in her shoes … and now, she’s walking in Stuart Weitzman’s.

In the world of Stuart Weitzman, “sexy” means being comfortable and confident in your own skin, and the campaign captures this essence in a natural, classic, chic way while clearly showcasing the new season’s lust-worthy boot styles. The international advertising campaign will launch in September in the United States, Italy, France, Canada, Dubai, Germany, Spain and Asia. Outdoor advertising (billboards and kiosks) will run in Los Angeles, New York, Miami, Milan and Paris. Behind-the-scenes video and additional creative content will be featured on www.stuartweitzman.com and in Stuart Weitzman boutiques worldwide. A short film featuring Kate Moss in an engaging omni-channel campaign will also launch in conjunction with advertising to maximize social activation worldwide. 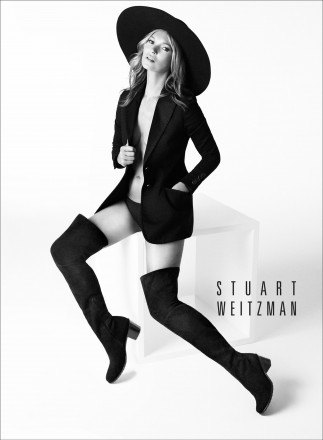 Stuart Weitzman is a division of The Jones Group Inc. (NYSE:JNY)

A little obsessed with shoes.

Stuart Weitzman Holdings LLC, a global leader in designer footwear, operates 44 retail stores across the United States, including New York, Beverly Hills, Chicago, Boston and Las Vegas.  The company also has 49 international stores and is sold in more than 70 countries.

A luxury brand built upon the idea of creating a beautifully constructed shoe, founder and designer Stuart Weitzman’s main objective has always been to merge fashion and function. The first thing a women puts on in the morning and the last thing she takes off at night, his shoes are designed to feel as good as they look and to look as good as they feel.