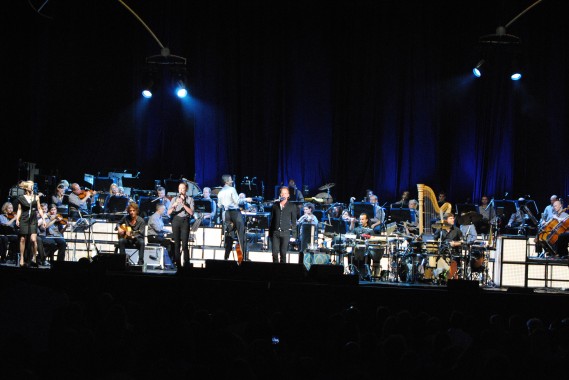 Sting appeared at ease performing with the orchestra. This orchestral interpretation was not new to him as he has had some practice with his recent collaborations with the legendary Chicago Symphony Orchestra in 2008, the Philadelphia Orchestra on their 153rd anniversary of the Academy of Music, and of course his previous shows leading up to West Palm Beach. 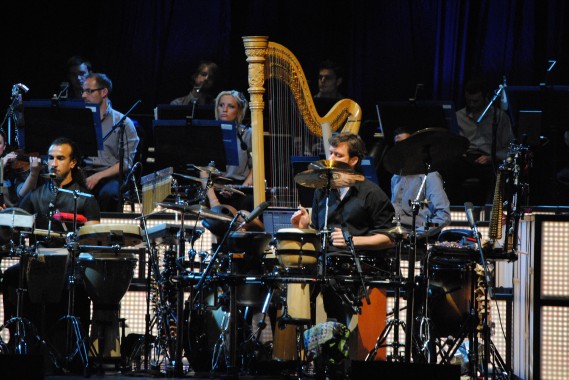 The collaboration with the Royal Philharmonic Concert Orchestra backed by Maestro Steven Mercurio seemed a natural fit for Sting, as they have had notable collaborations with the likes of Andrea Bocelli, Tina Turna, Luciano Pavarotti, among others. The 45-piece orchestra was magnificent and complemented Sting very well. 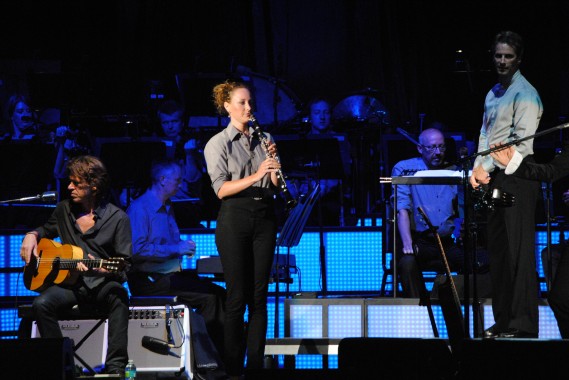 Watching the performance in an open, relax and casual atmosphere felt like summer concert season at the Lincoln Center in New York. It was a truly remarkable experience to watch the overall performance as Sting delivered his classical hits and crowd favorites, flawlessly. However, there was a moment where he sneezed while performing “Fields of Gold” which was noticed only by those viewing the monitors, and was excused with cheers from the audience.

Sting was also joined on stage by a quartet comprised of Dominic Miller (Sting’s longtime guitarist), David Cossin (a multi-percussion specialist in new and experimental music and featured member of the Bang on a Can All-Stars), Jo Lawry (vocalist) and Ira Coleman (bassist). 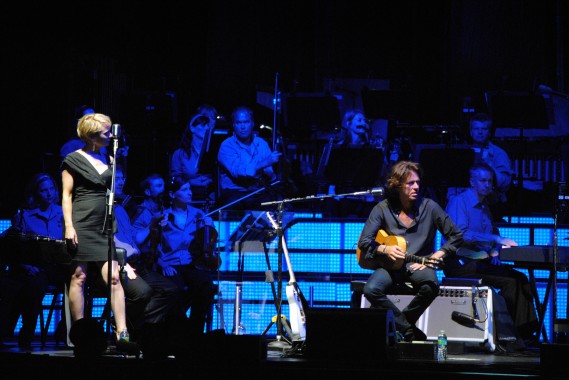 Australian Jazz vocalist Jo Lawry was an impressive back up singer, on the other hand her rendition of Whenever I Say Your Name, (a collaboration from his Sacred Love album with hip-hop artist Mary J. Blige and sitar performer Anoushka Shankar) came up short as it lacked the soul and energy of Mary J. Blige.

Sting was rather engaging where he commented and shared the inspiration for each song. “My dad wanted an exciting life for me…..I thought I have disappointed him…” he said. And as a tribute to his dad, he sang, Why Should I Cry for You?

The fans could not bear to see him go, so they screamed and begged for more. He had three (3) encores. And after returning on stage for Desert Rose, Sting stung the audience when he took his shirt off revealing his fit and youthful body which he maintains though rigorous workout routine, yoga practices and a healthy diet. After all these years of performing, he still looks great, and his vocals were incredible.

Sting is not afraid to reinvent himself and this new collaboration and passion for classical music is a hit.