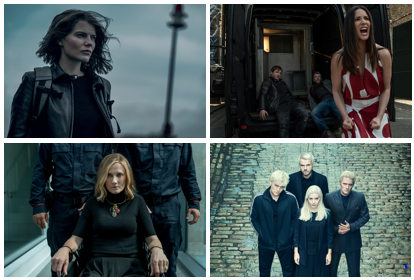 Starz also released sneak peek video footage plus new images from a variety of scenes to tease upcoming episodes of “The Rook”.

Produced by Lionsgate and Liberty Global, “The Rook” Season One premiered on Sunday, June 30th and will continue to air weekly on Sunday nights at 8pm ET/PT on STARZ in the U.S. and Canada, and on the STARZPLAY platform in France, Germany, Italy, Spain and Latin America.

“The Rook” is a supernatural spy thriller, which tells the story of Myfanwy Thomas, a woman who wakes up in the rain beside London’s Millennium Bridge with no memory of who she is and no way to explain the circle of latex-gloved dead bodies splayed around her. When Myfanwy discovers she is a high-ranking official in the Checquy, Britain’s last truly secret service for people with paranormal abilities, she will have to navigate the dangerous and complex world of the agency to uncover who wiped her memory – and why she is a target.

Liberty Global will simultaneously exclusively premiere the series on demand through certain of its European cable TV platforms, while Liberty Latin America will do the same in its markets in Latin America and the Caribbean. Lionsgate holds worldwide rights to “The Rook” and is actively licensing the series to international buyers.