Star Island real estate in Miami Beach has suddenly become readily available to the rich and famous. Star Island, long considered the most exclusive community in all of Miami, is composed of 34 waterfront properties. In this writer’s opinion, the homes in Indian Creek Village are much more exclusive, but that, of course, is an opinion.

Star Island sits like a floating jewel in the aquamarine waters of Biscayne Bay, between the main land and Miami Beach. The waters surrounding the island are part of the Biscayne Bay Aquatic Preserve. Star Island is not only coveted for its supreme, unspoiled waterfront location and limited number of residents, but also for its extreme privacy. Accessible by just one bridge, the gated enclave is the home of Miami’s wealthy elite.

Some of the most famous residents of this very pricey community are Sean Combs (P Diddy), Gloria and Emilio Estafan, Rosie O’Donnel, and Naomi Campbell and her billionaire boyfriend (who bought the mansion previously owned by Shaquille O’Neal). The largest property on Star Island is a 28,000 square feet mansion situated on a 6 acre parcel of land, owned by Phillip Frost and his wife. Frost used to run a large American drug company called IVAX, which was sold several years ago, to TEVA, an Israeli drug company. 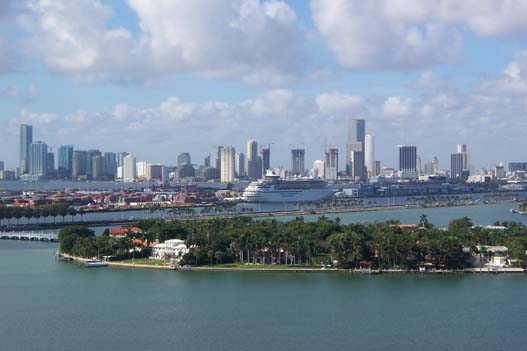 Whether or not any of these ultra-luxury properties are sold this year, is left to be seen, but if some of them are sold, it should come as no surprise, in light of a report published yesterday by the Miami Association of Realtors. The report states that pending sales of homes and condos, an accurate indicator of future market conditions, rose 22 percent in Dade County last month, year over year to 11,182 from 9,164 in February 2010.